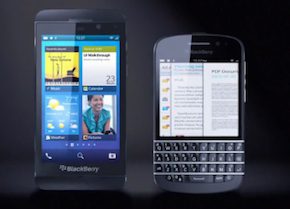 “I don’t want to go too much into detail here, because I don’t want to disclose how we’re going to do this,” Heins said on the call. “But yes … we have to educate and get our customers up to speed, actually prior to launch, and we have certain actions in place of how we will be doing this.”

However, thanks to a video prematurely posted to Vimeo, and some quick downloading by the folks at CrackBerry and a few other sites, it appears industry watchers now have a good idea of RIM’s big idea: a gimmick in which a single device is passed from super-user to super-user. Each person has 24 hours with the smartphone and in that time must do something “amazing.”

RIM will select an assortment of people, a mixture of celebrities and regular old people, who are “all united by their desire to do something great.”

You could start with Lady Gaga, who would create a new track in a single day. She will get suggestions and inspiration from her fans on BBM and use the new BlackBerry to record sound. At the end of the day, she will release the track, ready for download. Then she will pass the device on to J.K. Rowling, who will use the amazing new keyboard and predictive typing software to write a short story on the handset, with plot ideas submitted by fans. That evening, her story will be published for everyone to enjoy. Then she will pass the device on to a specially chosen member of the public. They would be a BlackBerry person, someone who wants to realize an ambition …

That member of the public, naturally, would pass the BlackBerry 10 smartphone on to Ridley Scott.

Certainly, the celebrity component should grab some attention. Though this pragmatic writer wonders about the silliness of making these “BlackBerry people” work in such an artificial way, when the hope of the phone is for it to more organically aid people in their everyday pursuits.

Regardless, RIM has not confirmed the legitimacy of the video, and some rougher bits of the video suggest it’s still a work in progress.

For example, a “developer from India”—who might receive the phone from Rowling and create an HTML5 traffic-update app that he would release by the end of the day—is not only wearing two shirts too many, but seems to be a Bollywood film actor. The bottom of the snippet of film showing him buttoning his third shirt is stamped www.yahrajfilms—a Bollywood film site.

RIM’s Heins noted that new BlackBerry 10 smartphones—a full touch-screen device and a QWERTY device, as the video also shows—will feature HD displays, exceptional typing experiences and the fastest browsers around. While in advance of the BlackBerry 10’s early 2013 launch the public can expect details about the BlackBerry 10 platform to continue to emerge, they shouldn’t expect a look at the new phones.

On the upside, RIM now has plenty of experience with wrangling a situation that has moved beyond its control.