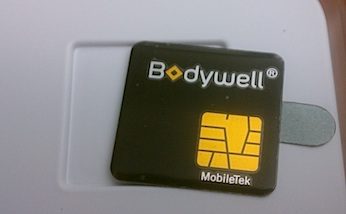 NEW YORK — Cell phone radiation falls into a “better safe than sorry” zone, doctors and scientists argued during a Feb. 11 symposium here hosted by EZ Technologies, which is now selling the Bodywell Chip—a $30, roughly inch-square chip the thickness of a SIM card that consumers can peel the back off of and stick to their mobile phones.

Cellular phones emit various amounts of radiation, and bodies can safely absorb limited amounts. Each cell phone (listed somewhere in their fine print) has a specific absorption rate (SAR)—loosely, the amount of radiation that it presents to a user’s head. The Federal Communications Commission (FCC) oversees SAR levels and has designated 1.6 watts per kilogram as the highest safe level for public exposure.

The Bodywell Chip, in FCC-approved labs, has been shown to reduce SAR levels by up to 80 percent, without reducing the phone’s reception, said Dr. Nachaat Mazeh, a research associate at Beaumont Health System in Michigan, who presented the results of his experiments, as did Moshe Einat, a researcher and lecturer at the Department of Electrical & Electronic Engineering at the Ariel University of Samaria, in Israel.

“Children today are growing up in a world that only knows the iPhone, and it is critical that we have an understanding of how the pervasive use of the iPhone and all other cell phones will affect our children, Einhorn said in Feb. 7 statement announcing the symposium. “Cell phone radiation is real, and preparation is the best prevention.”

Opening his remarks at the event, Einhorn quoted Albert Einstein—”A new type of thinking is essential if mankind is to survive and move toward higher levels”—and offered Aspartame and tobacco as examples of products that were once considered harmless but have since been proven otherwise.

“We use our cell phones without thinking of anything more than convenience,” he said. “The effects of the waves generated by phones have been studied again and again … and notable doctors have publicly performed experiments showing that radio waves from phones can adversely affect human tissues, and particularly the brain.”

Einhorn added that he was not advocating that people not use cell phones, but that they do so with a mindset of prevention.

In its literature, EZ Technologies points out that FCC guidelines state that phones should be held up to an inch away from the head, though most users press them to their ears; that FCC SAR guidelines are based on fully developed adults, not children with “smaller heads and softer skulls”; and that the FCC SAR limits were established in 1996, when sans-3G feature phones were the norm.

The depth of radiation absorption by the human brain, 1996 research proved, varies considerably between an adult, a 10 year old and a 5 year old.

“My feeling about this is: We do not know what is going to happen or not going to happen. But we do know that when there’s something that affects people, we need to be careful about what it does. … You need to be made aware of what can happen,” said Nancy Meuller, a neurologist with the Institute of Neurological care, who sat on a panel during the symposium and recommends using the chip.

Mueller added that brain tissue in children is delicate, and that the human nervous system doesn’t mature until the late teens or even late 20s.

“We can’t do studies on human beings—it’s illegal and immoral—so we have to use our common sense,” she said. “And I think this is a perfect example of where common sense trumps scientific evidence. As a neurologist, I certainly would not want a child, or an adult, to have any kind of ongoing [exposure to even low-level radiation].”

EZ Technologies said that some wireless carriers have expressed some curiosity in the product, but for now, it is only available through the company, certain retailers and Amazon.com for $29.99.

The chip is made up of an aluminum base, metal and minerals, but until a patent is approved, the company is reluctant to say more. Each chip is guaranteed to last the length of a smartphone’s life; Einhorn said that the chips, now three and five years into use, are still showing the same absorption-rate levels.

“There was a time when people were resistant to seat belts,” he said. “Bodywell is a seat belt for cell phones.”