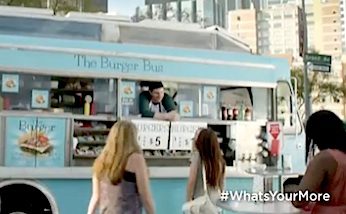 Called “Half Is More,” the campaign asks consumers why they’d pay twice as much for the same thing.

In a television ad—the campaign will also include digital, print, retail and social media components—a man selling burgers out of “the world famous Burger Bus” tells a customer, “OK, that’ll be $10, or $5.”

“We get to pick [which price]?” asks another confused customer, standing in line.

When it’s confirmed that it’s the same burger, and that everyone would like to pay $5, the burger-slinger smiles: “Of course you would like to pay $5, right? If you had the choice, you wouldn’t want to pay double for anything. So why are you still doing it on AT&T and Verizon Wireless, when you know if you switch to Cricket, you can pay half?”

Cricket has a 4G Long Term Evolution (LTE) network that covers 21 million people (not exactly the same burger—Verizon’s network covers well over 260 million people in 486 cities), it offers the Apple iPhone 5, and it announced May 22 that it will begin selling the Samsung Galaxy S 4 starting June 7.

Customers can buy the Galaxy 4 S outright for $599.99, or qualifying customers can put down $54.99 and pay on a monthly payment plan.

“Most wireless customers have been misled to believe the only way to get the phones and plans they need is to give up control and overpay the likes of AT&T and Verizon,” Tyler Wallis, senior vice president of product and marketing, said in a statement. “Cricket is challenging consumers and asking the question that if you can pay only half and get the same thing, why wouldn’t you?”

Cricket offers three smartphone rate plans, which start at $45 per month and include unlimited music through Cricket’s MuveMusic. Smart plans with LTE start at $50 per month, with 1GB per month of data at 4G speeds.

Verizon offers Prepaid, Business and Share Everything plans; the latter varies considerably, as it’s based on how many devices are connected to the network and how much data is involved. The simplest plan—one smartphone with 1GB of data— would start at $90.

While it has been suggested that T-Mobile might want to attract customers away from No. 3 player Sprint, T-Mobile CEO John Legere has said he’s set his sights higher.

“The more likely target for us is the one that we’ve got straight in our headlights, which is AT&T. I think by focusing on them, the big winner is consumers,” Legere said during a May 1 interview on Bloomberg Television.

Legere added that he didn’t expect AT&T or Verizon to respond to the service plan changes that T-Mobile has made.

“I don’t think they can or will reply because, first of all, they’re making a ton of money. They’re picking the pockets of consumers. And right now, we’re a small player. They’ll probably ignore us,” said Legere. “But if they don’t … we’d love to have them [come over and fight with us].”