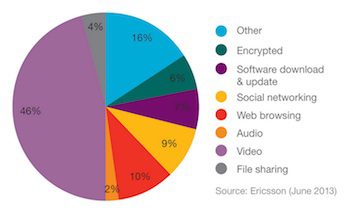 Ericsson has released its latest report on the state of mobility. It’s a feast for statistic lovers, putting into specific terms what one might expect: Networks are getting faster, more people are now toting phones—and smart ones—and mobile data use is through the roof. Between the first quarters of 2012 and 2013, it doubled.

By the broad strokes, global mobile penetration reached 90 percent, or approximately 6.4 billion subscriptions, during the first quarter of 2013—a figure Ericsson expects to reach 9.1 billion by 2018. User numbers—multiple subscriptions per user help to account for the discrepancy—reached approximately 4.5 billion during the quarter.

Approximately 130 million new subscriptions were added during the quarter, with North America (contributing 3 million) coming in second-to-last behind Western Europe, which added 2 million, representing the second-slowest area of growth.

About 50 percent of the phones sold during the first quarter were smartphones, though of total global mobile phone subscriptions, only 20 to 25 percent are smartphones, “leaving considerable room for further uptake,” said Ericsson.

This year marks the plateauing and decline of GSM- and EDGE-only subscriptions, as WSCDMA/HSPA and Long Term Evolution (LTE) network subscriptions rise. Globally, LTE is expected to reach 2 billion subscriptions in 2018, though in North America, the majority of subscriptions are expected to be on LTE by 2016 and grow to 70 percent by 2018.

These networks are of course employed in the service of mobile users, whose consumption rates can hardly be overstated.

In addition to doubling year over year, growth between just the fourth quarter of 2012 and the first quarter of 2013 was 19 percent.

With the introduction of the Apple iPhone in 2007, consumer data use changed and has since kept on changing. The Ericsson report shows data use at the end of 2007 as a barely visible blip, well below voice traffic at approximately 50 petabytes. By the fourth quarter of 2009, voice and data had about evened out, at 100 petabytes. From there, voice rose slightly through the years, before stagnating at about 200 petabytes. Data, meanwhile, hit 400 petabytes by mid-2011, doubled that in mid-2012, and as of the first quarter of 2013 was edging toward the 1,600-petabyte mark.

Those data figures don’t include WiFi, Mobile WiMax or M2M traffic, nor VoIP as a measure of voice traffic.

This year, global mobile traffic—a combination of voice, mobile phone traffic and mobile PCs, tablets and routers—is expected to again double, with an ongoing result of 12 times the traffic by 2018.

The more sophisticated the device, the more advanced features users turn to. Today, smartphone owners who subscribe to music and video streaming services on average consume more than 2GB of data traffic per month.

Currently, 10 percent of the world’s population is covered in LTE. By 2108, Ericsson expects that figure to be 60 percent.

For tasks such as Web browsing, emailing and instant messaging, Ericsson says a downlink speed of 100K bps is sufficient; for audio and video streaming, 1M bps is, while 10M bps delivers a “very good” experience, enabling high-quality video streaming and video conferencing, said the report.

According to its study, in North America 95 percent of subscribers have access to at least 0.1M-bps speeds, 78 percent can access at least 1M-bps speeds, and 31 percent have at least 10M-bps speeds. Around the globe, these are the highest percentages in all three categories, with Western Europe and the Middle East following.

Indeed, network performance (20 percent) was found to be the No. 1 driver of customer loyalty to an operator brand, said Ericsson, with value for money (16 percent) and ongoing communication (11) following.

In the aptly named “Signature of Humanity” section of the report, Ericsson showed how all that traffic aligns with users’ daily habits. Following network use in London, New York and Hong Kong over a year, Ericsson found that people tend to start their days with data use—checking the weather, emails or their calendars, likely within minutes of their alarms’ buzz.

Voice communication follows, picking up around 8 a.m., as coffee is consumed and offices are entered. And finally, as a seeming follow-up to earlier activities, an increasing number of text messages are sent near the 9 a.m. hour.

These habits changed little, save for Christmas and New Year’s Day, when New Yorkers and Londoners reach out to loved ones via texts, causing an early “SMS storm,” per the report. The same went for Chinese New Year in Hong Kong, where an even larger impact on SMS traffic was found.

Other cultural differences were evident in late-night habits.

In London’s financial district, all communications slowed dramatically, suggesting a large commuter population leaving the area. In Hong Kong, voice traffic declined in the evenings, while data traffic continued on, as users turned to the Web, video clips and movies.

In New York, it all raged on. Said the Ericsson study, “New Yorkers maintain a level of mobile activity at home, both for voice and data, similar to that at work.”