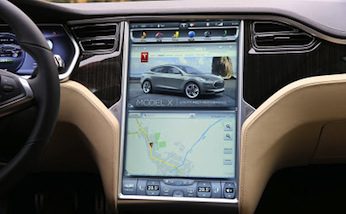 The deals are among the latest in a fast-growing market referred to as the “connected car.” In 2013, the connected car market is expected to see revenue of nearly $22 billion, according to a November 2012 report from Visiongain.

“You should have access to comprehensive, accurate and useful information no matter where you are—including when you’re behind the wheel,” Mickey Kataria, senior product manager of Google Maps for Business, wrote in a Jan. 2 blog post.

Hyundai Blue Link currently offers applications and mobile features to drivers. New features will include a Send to Car feature for smartphones, Point of Interest Search and Local Search by Voice, which Hyundai officials said in a statement will “help drivers easily find points of interest [POIs] and get to destinations more accurately and reliably using Google’s continuously updated Places database.”

Among the key features are Google Integration, for the use of Google Maps and Google Places; Car Care Web, a portal that enables drivers to check vehicle diagnostics, status and maintenance schedules; My POI, which enables users to send a Google Maps destination to their cars from their smartphones; a Parking Minder that offers several ways to help forgetful folks locate a car or remember to feed a meter; and 911 Connect, which within 10 seconds of an airbag deployment calls emergency services and puts vehicle occupants in contact with an operator.

Henry Bzeih, Kia’s chief technology strategist and head of its connected car program, called the update a “breakthrough” and “one of the industry’s first mobile pure app-based telematics systems.”

The first Kia vehicle to receive the upgraded system will be the 2014 Sorento CUV (crossover utility vehicle), which features an 8-inch touch-screen. Despite being built on Google’s software, at launch, the only device that will be compatible with UVO eServices is Apple’s iPhone, though not the latest model. Compatibility with iOS 6 is expected in early 2013, and compatibility with other smartphones—presumably those running Google’s Android—will arrive in “late 2013,” said the carmaker.

Other automakers that have teamed with Google include Audi, which offers drivers voice-controlled local search information and satellite and Street View imagery; Daimler, which offers Mercedes-Benz A-Class drivers a Digital DriveStyle App that offers Google local search, as well as Zagat ratings; and Tesla Motor Co., which offers Google Maps to drivers of its Tesla Model S. In the latter, Google Earth and Street View images are, one imagines, particularly easy to view, as the car features an in-dash 17-inch display.

In the connected car space, the details of who pays for what have been murky, but it’s an area AT&T is keen to explore. In November 2012, the carrier announced plans to invest $14 billion over three years on expanding its network and advancing new wireless initiatives, including the connected car. The carrier, citing a statistic that says that by 2016 more than half of new vehicles will be connected wirelessly, said it already has deals with Ford, Nissan and BMW.