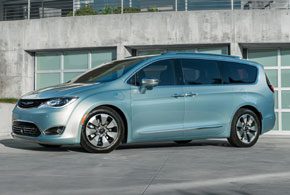 By the year’s end, Google hopes to have on the road the first few of what will eventually be about 100 new 2017 Chrysler Pacifica Hybrid minivans featuring the company’s self-driving car technology.

As a first step in that direction, Google has entered into a collaborative agreement with Fiat Chrysler Automobiles (FCA) under which the automaker will modify the test minivans so Google can install its self-driving hardware and software in them.

The collaboration, announced this week, marks the first time since Google launched its autonomous vehicles initiative that the company will work directly with a major automaker. The move signals a significant expansion of Google’s ambitious effort to build and deliver vehicles capable of driving entirely by themselves over the next few years.

Over the past two years or so, Google has built and tested a fleet of vehicles featuring the company’s autonomous driving technologies. The test vehicles have included those that it has designed and developed from scratch and also a fleet of some 22 Lexus RH45h SUVs that the company has retrofitted with self-driving gear.

Google’s own nearly three-dozen self-designed vehicles are being tested to operate without any of the usual controls, such as a steering wheel, brake and accelerator pedals that are found in conventional vehicles.

Four U.S. cities have so far given Google the green light to test its autonomous vehicles on public roads. In total, the company has tested its fleet over more than 1.5 million miles and has compiled a massive volume of test data in the process.

The collaboration with FCA would more than double the fleet of vehicles equipped with autonomous technology that Google is testing, the company said in a blog post on its Self-Driving Car Project page on Google+.

“FCA will design the minivans so it’s easy for us to install our self-driving systems, including the computers that hold our self-driving software, and the sensors that enable our software to see what’s on the road around the vehicle,” Google said. The Chrysler Pacifica’s minivan design will also give Google an opportunity to see how a larger vehicle fares with its self-driving technology, officials at the tech giant added.

Under the collaboration agreement, Google and FCA engineers will work together to integrate self-driving features in the Chrysler minivans. “This experience will help both teams better understand how to create a fully self-driving car that can take you from A to B with the touch of a button,” Google said.

Google is one of several companies that are working on integrating autonomous technology into vehicles. Others include Tesla, Mercedes Benz, Nissan, Volkswagen/Audi, BMW and Ford.

Industry analysts said that both Uber and Google are hoping eventually to be able to use autonomous vehicles, at least initially, in the rideshare business.

Meanwhile, in a separate but related development, Google, Uber, Lyft and Volvo Cars announced a coalition earlier this week under which they will try to get the federal government to move faster in setting policies and standards for bringing autonomous vehicles to market quicker.