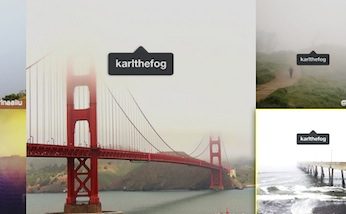 Facebook-owned Instagram added a Facebook-like feature May 2: the ability to tag people, places or things in photos.

Called Photos of You, the feature further rounds out the app, Instagram said in a blog post.

“Your captions and hashtags capture the ‘what?’ and your Photo Map answers the ‘where?’ but until today we’ve never quite been able to answer the ‘who?'” said the company.

There’s a new line in the application that lets a user type in who is in a photo and drag it over them, and a new Photos of You icon where you can see a list of, well, you get it.

Only the user can add people labels to her photos. When a user tags someone, that person receives a notice saying so. There’s also the option, in the settings menu, of insisting on approving a photo of you before your name is attached to it.

For the time being, Instagram is letting folks get used to the Photos of You section, keeping it private to each user until May 16, so you can “play around and get used to the feature,” it blogged.

In addition to giving people a simple, new way to see photos of themselves—previously, finding such photos was a matter of a user looking through her feed to see if her handle had been mentioned—it presents a new opportunity for brands, says Matthew Witt, executive vice president and director of digital integration at marketing agency TRIS3CT.

“There’s a way for brands to craft special stories about brands and people and how they intersect,” Witt told eWEEK. “There are sponsored tweets”—brands pay celebrities to tweet—”and I can see something like that evolving around this. But it would have to be very authentic. For brands to make real use of this, it has to go back to the experience.”

Witt gave the example that Snoop Dogg is very popular on Instagram and one of his photos recently showed a gigantic banana split.

“That felt very authentic, like he was really going to kick back and dig into this huge dessert. But if it were blatantly art directed, with a Dairy Queen or Haagen Dazs on the side of the bowl, it would ruin it,” said Witt. “It’s a balancing act.”

Other apps are already trying to monetize on the act of users pushing out content to friends and followers. Kapture is an Instagram-like Android/iOS app that rewards users for “taking and sharing photos of the brands and services you love with your friends.”

For example, a person might snap a photo of herself in a dress she’s trying on in a shop, and receive 10 percent off if she buys it. Or, someone who snaps and shares a photo of his entree at a restaurant—a thing that a countless number of people have already done on Instagram—might receive 50 percent off a dessert order.

“It’s taking a process that is very organic, that people are used to, and in return for it getting a reward,” Michael Szewczyk, president of Kapture, told eWEEK in January, shortly after the company did a soft launch in Manhattan.

“A big lesson for us is really being able to do things in real time—being able to connect with a brand, a merchant, the world around you,” said Szewczyk.

Witt, while not speaking directly about Kapture, said he was uncertain of such a business model and told a story about a Chicago restaurant that in its menu offers little insider tips that it encourages diners to share via social media.

“They don’t have to incentivize them to do it, the experience alone is worth it,” Witt explained.

“I think [the other model] is detrimental,” he added. “You risk commoditizing your brand.”