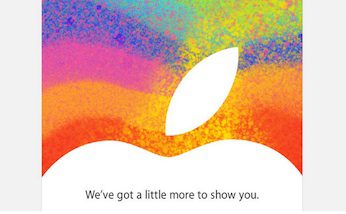 Apple has invited select members of the press to an event Oct. 23 at the California Theatre in San Jose. The event begins at 10 a.m., and what attendees can expect then, Apple didn’t say. Though it hardly needs to. Just as the date of the event has been long foretold by the rumor mills, so has the reason for the party: the introduction of a smaller iPad. Or, as it’s come to be known until Apple dictates otherwise, the iPad Mini.

The invitation seems, subtly, to back this up, saying little more than: “We’ve got a little more to show you.”

The invitation features a portion of the iconic white apple silhouette against layers of saturated colors, bringing to mind boardwalk souvenirs of layered, colored sand. It’s an uncharacteristic invite from a company that prides itself on an aesthetic of understatement and minimalism, suggesting there’s perhaps an art element involved, as there is in the stylus-equipped Samsung Galaxy Note 10.1.

Jefferies analyst Peter Misek expects the Mini won’t be all that Apple shows off Oct. 23.

“We believe Apple will unveil [the] iPad Mini on 10/23 along with a 13-inch Retina MacBook,” he wrote in an Oct. 16 research note. “We [also] believe there is a chance a new iTunes is unveiled with streaming music and Facebook integration.”

Later in the report, Misek went into slightly more detail about the new iTunes, which if it doesn’t unveil alongside the iPad Mini, it’s expected to hold until the first quarter of 2013.

“As a replacement for Ping, we believe Apple will make it easy for people to Like a song and have it appear on their Facebook live stream,” he continued. “People will also be able to receive recommendations based on their friends’ selections.”

The invitation arrived as rival Microsoft not only finally announced pricing for its Surface tablet, which will arrive Oct. 26 with the launch of Windows 8, but launched Xbox Music for its Windows 8 devices.

“Whether it’s music you’ve purchased on your smartphone, a music app on your tablet, listening to songs through the living room TV or turning to Internet radio on your PC at work, the music you love is scattered across different services,” Microsoft said in an Oct. 16 statement. “Enjoying music today requires too much work.”

Xbox music will enable users to stream custom-created playlists for free, and stream music they want to own or download-to-own songs.

Jerry Johnson, Xbox general manager, made clear during an interview with G4TV exactly whom Microsoft is going after with the service.

It sounds as though CEO Steve Ballmer is staying true to the declarations he shouted during a July interview with CRN.

“We are not going to leave any space uncovered to Apple,” Ballmer insisted, according to the report. “Not the consumer cloud. Not hardware-software innovation. We are not leaving any of that to Apple by itself. Not going to happen. Not on our watch!”