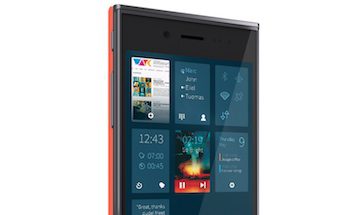 Jolla, the Finnish company formed by former Nokia employees unwilling to scrap the work they’d done on the MeeGo operating system, has introduced its first smartphone, the Jolla (sounds like YO-LUH). The phone runs an operating system that has since been renamed Sailfish.

Jolla co-founder Marc Dillon, in a video posted to YouTube May 20, holds up the Jolla phone—which features a distinctive, two-part design—and asks people to “join the tribe.”

“To make this really great, we need your help. Show that there is a market for Jolla by participating in our preorder campaign,” Dillon says in the video.

“Jolla is about participation and contribution also,” he continued, asking bloggers, app developers and designers to get involved by doing what they do.

“Most importantly,” he concludes, “Jolla is a movement. Join the tribe.”

The Jolla features a 4.5-inch Estrade display, according to the Jolla site, as well as a dual-core processor, 4G connectivity—which according to an Engadget report means Long Term Evolution (LTE)—an 8-megapixel camera, 16GB of memory plus a microSD card slot, a user-replaceable battery and the gesture-based Sailfish OS, which is “Android-app-compliant.”

It also comes with “the other half,” said the site, referring to the phone’s two-part construction. While the site isn’t revealing all, the phone seems to consist of a slim display and colorful back halves that can be swapped out.

“Unite the halves, create your Jolla,” said the site, adding that the software theme “magically” knows to match the color—aqua, orange or lime—on the back.

“At the core of Jolla is Sailfish, a mobile-optimized OS that has the flexibility of a unique, open platform. This is the world’s best stage for your apps, including Android,” said Jolla.

It adds that the OS intuitively operates “entirely with gestures” and that “all of the screen estate is yours, without the need to stretch for the corners or spin the device in your hands.”

In 2010, Nokia merged its Linux-based Maemo OS with Intel’s Moblin—”mobile Linux”—OS, to form MeeGo, a platform it hoped would be a replacement for Symbian. However, development of the platform progressed more slowly than expected, and in February 2011 Nokia’s then-new CEO Stephen Elop announced that Nokia was turning its focus to Microsoft’s Windows Phone.

In a July 2012 statement, Jolla announced its creation and purpose: to continue “the excellent work that Nokia started with MeeGo.”

The company was formed by directors and key players from Nokia’s former N9 division who have evolved the MeeGo OS using Qt and Mer Core technologies. The N9 was the one MeeGo phone Nokia did release

“Nokia created something wonderful—the world’s best smartphone products,” said CEO Jussi Hurmola in the statement. “It deserves to be continued, and we will do that together with all the bright and gifted people contributing to the MeeGo success story.”

The Jolla phone is priced at approximately $500, and the team said it’s hoping to ship the preordered phones by the end of this year.

Those particularly keen to join the movement can also get a limited-edition Jolla T-shirt for $51 when they preorder, and be bumped to priority preorder status.