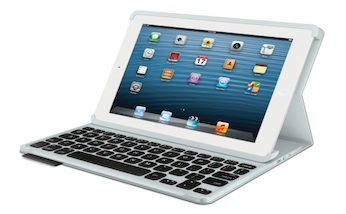 While Apple’s handy virtual keyboard on its iPhone and iPad tablets is one of the many reasons the gadgets are so successful, that hasn’t stopped other vendors from offering a physical keyboard consumers can attach to the device, as evidenced most recently by the release of a keyboard folio for the iPad and iPad mini from Logitech.

The accessory connects to the user’s iPad through Bluetooth and is designed to deliver the feel of familiar, traditional full-size keys with function shortcuts for the iPad. The folio is also designed to both safeguard the tablet and its touch-screen display while complementing it with “refined” fabrics and new colors.

Logitech has also included magnetic closures to further help minimize the risk of damage to the tablet while in transit, and a hands-free flip stand offers two viewing angles. The Folio also features instant on/off functionality that wakes the tablet when a user opens the cover and puts it to sleep when the user closes it, helping to preserve the tablet’s battery life.

The company claims users can enjoy typing for up to three months on a full charge (based on two hours average use per day). When it’s time to recharge, the USB cable charger provided will recharge the keyboard as the user types.

“Our goal with the new Logitech Keyboard Folio was to take the award-winning typing experience from the Logitech Ultrathin Keyboard Cover and add an extra layer of protection,” Mike Culver, vice president of brand development for tablet accessories at Logitech, said in a statement. “To take the design a step farther, we combined Logitech’s expertise and experience in keyboards with high-quality materials to bring a sense of sophistication to the functional protection people want and need for their tablets.”

In February, Logitech launched the Ultrathin Keyboard mini, a slim aluminum cover for the iPad mini that offers many of the same features and retails for $79.99. That accessory also features an instant on/off feature, a three-month battery life and iPad mini function shortcut keys for the commands used most often, such as copy and paste.