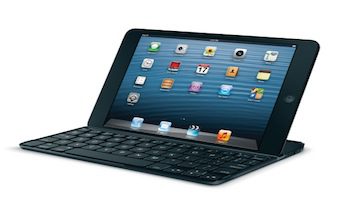 Tablet owners who still prefer a tactile keyboard when typing out longer emails or messages usually have a variety of options for detachable accessories, and hardware and software specialist Logitech joined the bandwagon with the release of the Ultrathin Keyboard mini, a slim, protective keyboard cover designed for Apple’s 7-inch iPad mini tablet.

The keyboard, which retails for a suggested retail price of $79.99, will be available in the United States and in Europe this month, and includes an instant On/Off feature, which means the iPad mini automatically wakes up when the cover is opened and switches to standby when it is closed. The Ultrathin Keyboard mini has a slim aluminum cover that matches the tablet’s finishes and secures itself to the tablet through integrated magnets.

The keyboard offers a three-month battery life, based on usage of two hours per day and also doubles as a hands-free view stand so consumers can use the iPad mini without having to hold it. The device’s built-in Bluetooth EasyType technology offers a traditional typing layout in a compact 7-inch form factor, plus iPad mini function shortcut keys for the commands used most often, such as copy and paste.

“We are excited to bring the award-winning Logitech Ultrathin Keyboard Cover design – recognized across the industry as the best mobile keyboard for iPad – to the iPad mini,” Logitech’s director of brand development for tablet accessories Alexis Richard said in a statement. “Think of it as the other half of your iPad mini. Its clever seven-inch design fits perfectly with the iPad mini while offering full-size keys for easy typing, saving your screen space for content.”

In recent months Logitech has focused its business strategy more closely on Apple devices, announced the expansion of its Mac lineup with two products: the Bluetooth Easy-Switch Keyboard for Mac, iPad and iPhone and the Rechargeable Trackpad for Mac.

The Bluetooth Easy-Switch Keyboard ($99.99) can pair with up to three Apple devices simultaneously, and its familiar Mac layout features Apple-centric keys including Command, Brightness and Mission Control. The device allows users to go from typing an email on a Mac to taking notes on an iPad to replying to a text on the iPhone by simply pressing a button. The keyboard turns on its illumination when the user’s hands approach, and it automatically dims or brightens based on the amount of light in the room.

The Rechargeable Trackpad ($69.99) features multi-touch control based around a glass surface and aluminum finish to match the look of Apple products, and has been engineered with embedded precision sensors and resistance to fingerprints and scratches. In addition, the trackpad is rechargeable through a USB cable and can be used while being recharged. Fully charged, users have one month of power, which can be managed through its On/Off switch. With Bluetooth wireless connectivity, the trackpad also provides up to 30 feet of wireless range.