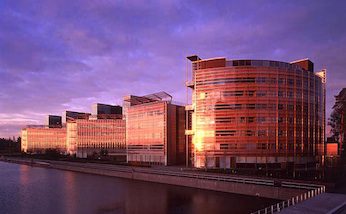 Nokia announced that it has reached a deal to sell and lease back its multi-building headquarters in Espoo, Finland. Exilion Capital, a Finnish real estate investment firm, has agreed to buy the headquarters for about $222 million.

The 500,000-plus-square-foot steel-and-glass building sits on the Gulf of Finland. It was designed by Finnish architect Pekka Helin and has been home to Nokia since 1997.

“We had a comprehensive sales process with both Finnish and foreign investors, and we are very pleased with this outcome,” Nokia Chief Financial Officer Timo Ihamuotila said in a Dec. 4 statement.

“As we have said before, owning real estate is not part of Nokia’s core business,” Ihamuotila continued, “and when good opportunities arise, we are willing to exit these types of non-core assets. We are naturally continuing to operate in our head office building on a long-term basis.”

Nokia continues to struggle as it works to regain market share lost to Apple’s iPhone and smartphones running Google’s Android, as well as lower-cost handsets made by Samsung and other industry players such as ZTE and Huawei. In February 2011, Nokia committed to turn its support from Symbian to Microsoft’s Windows Phone, and on Oct. 29, it began shipping the Lumia 920 and 820, the newest smartphones to come from the partnership.

While AT&T has been Nokia’s primary cheerleader in the United States, on the same day, Verizon Wireless introduced a Nokia Lumia 822—its first Lumia device.

According to Dec. 4 data from Kantar Worldpanel ComTech USA, smartphones running Windows held a nearly 3 percent share of the U.S. market during the third quarter. It’s a figure that Microsoft, with partners Nokia, Samsung, HTC and others, is hoping to boost with the arrival of Windows Phone 8.

Nokia officials, during recent earnings calls, have repeated plans to make better use of both the company’s patent and real estate holdings.

On Nov. 27, Reuters reported that U.S. chip maker Advanced Micro Devices has plans for a similar deal. AMD wants to sell and lease back its 58-acre campus in Austin, Texas, and is looking for a buyer to pay between $150 million and $200 million.

“Contingent on finding an investor who wants to do a multiyear lease-back, it’s a good opportunity for us to unlock the value of the real estate to fund operations,” AMD spokesperson Drew Prairie told Reuters.

Prairie added that economic conditions in the area around the campus “are favorable.”

AMD has previously sold and leased backed its headquarters in Sunnyvale, Calif., as well as a building near Toronto.

AMD has been suffering the effects of a device market that’s shifted from PCs—its bread and butter—to tablets such as the iPad, which runs an Apple-made processor. During the third quarter, global PC sales declined by 8.6 percent, according to research firm IDC; this was worse than analyst expectations of a 3.8-percent contraction.

During the critical post-Thanksgiving weekend, the unofficial kick-off of the holiday shopping season, PC sales may have been not so bad, AMD CEO Rory Read told investors Dec. 4, according to Reuters. He added, “Our performance over that period looked reasonably well, but I think it’s a little early to call the holiday season.”