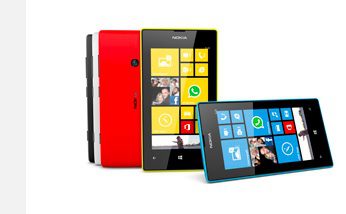 The Nokia Lumia 720 offers a high-end camera experience, featuring a large f/1.9 aperture and Carl Zeiss optics, with an HD-quality, wide-angle front-facing camera. The smartphone comes with the company’s Lumia apps, including Nokia Music, the Here location suite, and the option to add wireless charging with a snap-on wireless charging cover.

The smartphone comes in five colors, with an estimated starting price of $330 before taxes and subsidies. Rollout is planned to start in Hong Kong, Vietnam and Singapore in the first quarter (Q1) 2013, before continuing into broader markets in Q2, including China as well as markets in Europe, Asia, Africa and India.

The Lumia 520, with a 4-in. touchscreen, is Nokia’s most affordable Windows Phone 8 smartphone, and offers the same digital camera lenses found on the flagship Nokia Lumia 920, Nokia Music for free music out of the box and even offline, and the Here location suite.

The Lumia 520 comes in five colors, with an estimated starting price of $185 before taxes and subsidies. Rollout is planned to begin in Q1 2013 in Hong Kong and Vietnam, before expanding in Q2 to markets in Europe, Asia, including China and India, Latin America and Africa. Nokia also announced plans to launch the Lumia 520 in the United States with T-Mobile.

Nokia also unveiled the 105 and the 301 feature phones, which offer more affordable Internet and email access, and camera experiences inspired by the Lumia smartphones. The 105 features multiple alarm clocks, a speaking clock, a dust and splash-proof casing, pillowed key pad and a flashlight, and offers up to a 35-day battery life. The 301 features 3.5G Internet connection and the company’s Xpress Browser preloaded for up to 90 percent more data efficiency. The device also offers video streaming and comes with new smart camera features.

In addition, the company announced it is expanding its Here suite of location-based services to non-Nokia Windows Phone handsets. The Here Maps come with LiveSight, Nokia’s set of augmented-reality technologies.

LiveSight uses “sight” as a way to navigate the world, recognizing what people see through their phone’s camera and layering that view with relevant, place-based information. LiveSight also powers Place Tag, a digital lens introduced for Lumia. Place Tag adds location stamps to photos with relevant information about pictured places.

Nokia also announced new developer partnerships that use Nokia expertise in imaging, location and entertainment to deliver application experiences. Finally, Nokia and Microsoft announced a plan to combine their strength in the enterprise sector to bring more business customers to Windows Phone.

“The momentum behind Nokia is gathering pace. The launches today reflect our commitment to broadening our devices and services portfolio to meet the demands of people and businesses around the globe,” Nokia president and CEO Stephen Elop said in a statement. “By offering better experiences at a more affordable price we are reinventing the battle for affordable mobile devices, and Nokia has the building blocks to win.”