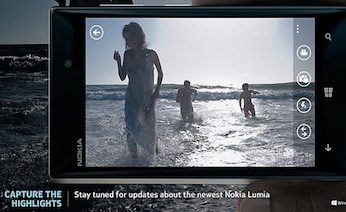 While Nokia CEO Stephen Elop has good naturedly feigned no knowledge of such a device, the rumors have been rampant, and now two ads confirm that the smartphone is on its way.

A billboard featuring the 928 advertises that it boasts the “best low-light smartphone camera.” Cnet’s U.K. site posted a photo of the billboard—which features a Verizon Wireless logo in the bottom corner—on May 5.

With a Verizon logo again on the scene, the ad promises PureView technology, Carl Zeiss options, and the ability to “capture and share amazing, blur-free photos” even in low-light conditions.

While AT&T has been Nokia’s main booster, since the phone maker made the switch from Symbian to Microsoft’s Windows Phone, rumors rightly pegged the Lumia 928 to Verizon, which currently only sells the midrange Lumia 822.

While Nokia’s Lumia efforts have been generally well-reviewed, the phones are thick and heavy—relative to competing efforts—and have found only light traction. The 928, it’s being suggested, will change all of that.

Bloomberg reported April 23 that the Lumia 928 will feature a 4.5-inch display, an 8-megapixel camera, wireless charging and a metal body—a departure from the current Lumias’ polycarbonate frame.

In late April, Nokia sent out invites to a May 14 London event, teasing, “The Nokia Lumia Story Continues.”

It’s expected that Nokia will show off a metal-body device at the event, and in the Vanity Fair ads, a silver side is visible, suggesting an aluminum chassis.

Chinese site Windows Phone Bar said the metal phone has been code-named Catwalk, and will ultimately be called the Lumia 925—except in the U.S. where, at Verizon, it will be called the 928.

The first quarter of 2013 was the first time ever that smartphones outsold feature phones, long Nokia’s bread and butter. While Nokia continues to sell feature phones, and low-end smartphones in developing markets, it needs to get more than a foot into the high-end device space in the all-important U.S. market.

For now, it’s apparently having great luck with appealing to value-driven U.S customers. Seeking Alpha contributor Jacob Steinberg reported May 7 that the Lumia 521 that Walmart began selling May 5 is sold out.

Steinberg said he checked 15 stores in the Los Angeles area and 21 in the New York City area, “and none of them had the phone available.”

Walmart sells the phone unlocked, for $129, but with service to T-Mobile, which offers plans starting at $30.

“If Nokia can double its American market share with help from Verizon and Walmart,” he added, referring also to the 928, “it will be highly profitable in the country.”