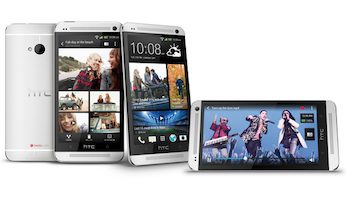 Smartphone reviews tend to stay on their respective subjects, so it’s been startling how many Samsung Galaxy S 4 reviewers have pulled readers aside to suggest they also check out the HTC One.

This is a great and deserved compliment for HTC, which tends to make pretty excellent phones that too few people take notice of. Since its years-ago successes with the HTC Evo 4G and Droid Incredible, HTC has struggled to attract the attention of consumers away from Samsung smartphones and Apple iPhones.

The One is a result of HTC summoning all its might and innovations, though not in a Samsung “throw it all at the wall and see what sticks” way.

For example, the One is the first smartphone to feature dual front-facing speakers, so when it’s set on a countertop or desk, it offers loud, crisp audio. (How has no one done this sooner?)

On its home screen the One features what HTC calls BlinkFeed, a live (but not automatically updating) feed of content that a user can customize. The tiles can be all Reuters news stories, for example, or your Facebook news feed plus Reuters, Cool Hunting and ESPN.

The One also offers a camera feature called Zoes—3-second videos that can be looked at frame by frame as well as combined into “highlight reels” or mini movies that phone can automatically create. Zoes offer a little more moment to savor—you can also see them playing within a photo gallery, which is nice—and it becomes addictive to try and capture a perfect 3-second clip. At least until one realizes that Zoes can only be shared on HTC’s Share site. When emailed or posted to Twitter, they simply appear as still photos.

The microphone in the One’s camera is also excellent. In a video clip of my daughter at a busy after-school playground, the din of screaming toddlers behind me and a teenage basketball game ahead of me were picked up as a background soundtrack to her light, 2-year-old voice.

In indoor settings, the excellent sound experience is even more exaggerated—everyone sounds like they’re wearing a mic. HTC says the One’s microphone is twice as sensitive as the average microphone and has 10 times the range—no argument here.

The One is also a good-looking phone, though here my feelings are more reserved than most you’ll find online. HTC boasts that the One features a metal unibody with zero-gap construction, but these are words I can’t get my head around. Looking at the side of the phone I see four colors and two textures, which hardly makes for the kind of look I think of as “seamless.” It very much looks like several pieces put together. What does unibody mean, then?

This is a quibble, of course, but quibbles are what I had with the One.

Review: The HTC One Is Great for Some, Better Than Most

While the One’s BlinkFeed is unique, and I can appreciate the amount of deal-making trouble HTC went through to offer it, it still felt like it an extra screen between me and the information I was after.

This is likely just a case of me not being the One’s targeted user. HTC executives have said that the BlinkFeed was created for those moments when one has 10 seconds, or a few minutes, to kill. That’s not me. I don’t turn to my smartphone for distraction; I grab for it when I need to check my email, send a text, take a photo or look up something online.

The One’s power button is a flush button on the top, left of the phone, and just the second or two it takes to grab the phone in the right way and depress that button felt like wasted time, compared with the swipe required to wake up a sleeping Z10.

Even after (in the Settings menu) I did away with the lock screen on the One, so that waking it sent it straight to the home screen, there was no quick way to view emails. A dedicated icon bar on the bottom can bring one to the phone, texting, camera and Internet apps, as well as to the main applications list, but not email.

There are multiple home screens and one can swipe to the right and have her most-used apps positioned there, with mail front and center. But after a few weeks of using the Z10, the One’s route to my most important content felt like it included too many steps. And the reward for completing those steps was viewing my emails. Or my text messages. But not both.

BlackBerry CEO Thorsten Heins has said that BlackBerry 10 “ends the in-out paradigm” of needing to return to a home screen to enter new apps, and it’s true. After getting used to the BB10’s Hub, it felt annoying to need to dip into different boxes—email, messages, Twitter—for various information.

When the One buzzed, indicating that something new had come in, I’d wind up poking around for a few seconds to see whether the noise meant that an email, a text message or a calendar alert had come in. With BlackBerry 10, there’s one place to see everything that’s important to me—calls, texts, my personal email, my work email, Twitter and Facebook—and I can get to all of it by waking the phone with a swipe and then a single gesture with my thumb.

Full disclosure, when BlackBerry introduced the Z10 at a New York event Jan. 30, it gave everyone in the audience a free Z10, me included. After more than a decade of writing about phones, I can promise you it was far from the first free phone I’ve ever received, though it was first phone in nearly as long that I wanted to make my “daily driver.” While it has its faults—things to be expected from the first device to run on a new platform—the OS feels modern, intelligent and genuinely efficient.

Review: The HTC One Is Great for Some, Better Than Most

Which is not to say the One isn’t a great phone. It’s fast, and its 4.7-inch display, with 468 pixels per inch, is gorgeous. (Though admittedly, I’ve yet to again have the wow experience I had with the HTC DNA and its 5-inch super LCD3 HD 1080p display.)

The One feels good in the hand—it’s not big and warm and slippery like the Galaxy S III or 4—and it looks good. If you often turn to your phone for entertainment, the One is a great choice. Google makes it very easy to purchase and watch television shows and movies, and of course there are endless apps to choose from in the Google Play store. (Trying the One, it was fun to use Instagram—an app not yet available for BlackBerry 10.)

As many reviewers said in summing up their Galaxy S 4 reviews, you can’t go wrong whether you choose the latter or the One. But those aren’t the only options out there.