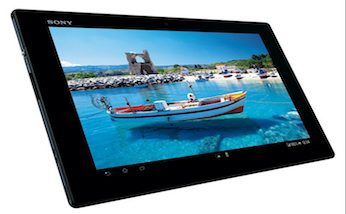 Consumer electronics giant Sony announced the launch of its latest 10-inch tablet, the Xperia Z, which runs Google’s Android 4.1 operating system, and with a weight of just over 1 pound (495 grams) and a thickness of less than a quarter of an inch, now has the distinction of offering the lightest, thinnest 10-inch tablet available in the market.

The 10.1-inch 1,920 x 1,200 display is powered with Sony’s Mobile Bravia Engine 2, which has an updated contrast enhancement algorithm and a more advanced sharpness filter to improve a media viewing experience. The engine, a subset of the platform found on Sony’s Bravia televisions, applies a software layer to the decoding step for video and for images in the Sony Album app, where the processing is done in real-time.

In keeping with Sony’s recent release of the Xperia Z smartphone, the tablet is dustproof and waterproof, and users can touch either device to the remote control of a Sony Bravia TV to view photos and videos on the big screen using the device’s NFC technology.

Sony’s tablet entry marks the latest in a long line of touch-screen tablets vying for market share at a time when competition is fierce. Already a strong player in the 10-inch tablet space, consumer electronics powerhouse Samsung is getting ready to debut an 8-inch Galaxy Note tablet that would compete directly with Apple’s popular iPad Mini device, a report from Samsung mobile device fan site SamMobile said last week.

With the release of the iPad Mini last fall, Apple greatly increased competition in the smaller form-factor tablet space, introducing a device that was more sophisticated than lower-end 7-inch tablets from companies like Google, Amazon and Barnes & Noble. Samsung’s 8-inch Galaxy Note tablet would likely be more of a competitor to the iPad Mini than Amazon’s Kindle Fire or Google’s Nexus 7 tablets.

An estimated 25 percent of Americans own a tablet device, such as an iPad or a Kindle Fire, up from the 10 percent who owned tablets in late 2011, according to a Pew survey, which was conducted from Oct. 15 to Nov. 10 among 2,252 Americans 16 years old and older.