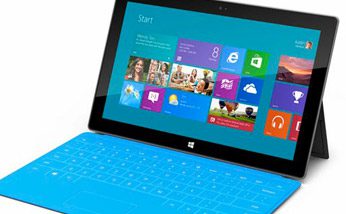 Microsoft disclosed that the Surface Tablet running Windows 8 Pro will hit the market in January with a list price of $899 for 64GB of internal memory and a 128GB version for $999.

In a blog post Nov. 29, Panos Panay, general manager of the Microsoft Surface division, said Surface with Windows 8 Pro, powered by x86-based processors, differs in a number of ways from Surface models running Windows RT that are powered by ARM-based processors, both in features and specifications.

Notably, Windows 8 Pro models will come with a specially designed pen for writing notes or marking up text on the Surface’s touch-screen. The pen is accompanied by technology Microsoft calls “Palm Block,” which, as its name implies, protects the text being written in the event the user’s palm inadvertently touches the screen.

Windows 8 Pro was developed alongside Windows RT to offer a tablet experience that Microsoft hopes will be more attractive to enterprise users because it will run Windows 7 applications on the new OS.

In addition, a Windows 8 Pro Surface will integrate with the Microsoft-based device-management and network-security systems that enterprises have in place better than will Windows RT devices, said Michael Silver, a research analyst with Gartner. But that integration alone won’t win over enterprise IT managers skeptical of Windows 8.

“Most organizations have no interest in moving broadly to Windows 8. Most organizations are still working on Windows 7; they’re happy with Windows 7 and medium to large sized enterprises don’t jump on the latest thing,” said Silver.

At the Microsoft annual shareholders meeting Nov. 28, the company identified a number of enterprises that have adopted Windows 8, but didn’t specify how they are deploying it or to what degree. Silver said British Telecom, for instance, can be expected to gradually phase in Windows 8-based tablets for drivers who service telecommunications equipment or visit residential or business customers, to keep track of their work in the field.

Silver adds that there has been some confusion in the marketplace about the rollout of Windows 8, confusion for which he blames Microsoft. Microsoft will be introducing a Windows 8 Pro-based Surface in January, but other original equipment manufacturers (OEMs) already have Windows 8 Pro, x86 devices on the market, along with Windows RT devices running ARM-based processors. In addition, he says, Windows 8 Pro devices aren’t just for businesses; there are tablets running Windows 8 for home users, too.

Surface with Windows 8 Pro will run an Intel Core i5 processor, Microsoft’s Panay explained. The chip will give Surface a graphics boost for its 10.6-inch screen with a 16:9 aspect ratio on what Microsoft calls its ClearType display, delivering 1920 by 1080 high-definition resolution. It also supports an external monitor display of up to 2560 by 1440 resolution.

Microsoft CEO Steve Ballmer said at the shareholders meeting that Microsoft sold 40 million Windows 8 licenses in its first month on the market, which would be ahead of the 30 million for the first month Windows 7 was on the market back in 2009. But Silver notes that 25 percent more PCs have been sold so far in 2012 than in 2009, which means there was more demand for PCs, not necessarily more demand for Windows 8.

Nonetheless, Microsoft is stepping up its marketing efforts for Windows 8 and Surface, particularly with the number of product placements in TV shows, a competition Silver says Apple has long dominated.

On the Nov. 28 episode of the ABC sitcom “Suburgatory,” the character Tessa Altman, played by actress Jane Levy, can’t be without her new tablet. While it’s not identified by name as a Microsoft Surface, it clearly is, and Tessa marvels at its “full-size USB port, integrated kickstand and a really sizable hard drive.” The broadcast also included TV commercials for the Surface.

Microsoft has also used product placement to promote Windows Phone on such series as “Hawaii Five-0” on CBS and “Bones” on Fox.