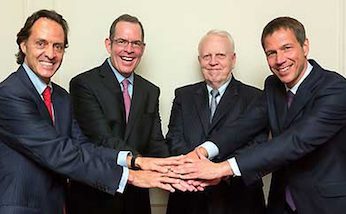 T-Mobile’s bid to buy MetroPCS is back on track.

John Paulson, head of Paulson and Co., a hedge fund that’s MetroPCS’ largest shareholder, has announced that he’s pleased with changes to the terms of a deal that would merge MetroPCS, the nation’s fifth-largest wireless mobile carrier, with Deutsche Telekom-owned T-Mobile, the nation’s fourth-largest carrier.

“While Paulson needs to review the revised proxy statement before making a final decision, Paulson intends to vote for the merger as restructured, the firm said in an April 11 statement, according to Bloomberg.

MetroPCS shareholders were scheduled to vote on the deal April 12, but on April 10 the carrier pushed the vote to April 24 at 8 a.m. Central Time.

Paulson and other shareholders had complained that the terms of the deal favored Deutsche Telekom. Paulson asked that the interest rate proposed in the deal be lowered from 7 percent to 4.2 percent and that the new company’s debt be reduced from $15 billion to $6.6 billion.

With the vote nearing, Deutsche Telekom agreed to sweeten the deal for MetroPCS, announcing April 11 that it would lower the interest rate by 50 basis points and the debt to $11.2 billion. It also increased the length of time during which it wouldn’t sell shares of the new company from six to 18 months.

It called this its “best and final offer.”

P. Schoenfeld Asset Management, a MetroPCS stakeholder that filed a proxy statement with the U.S. Securities and Exchange Commission urging other stakeholders to vote against the deal, was also pleased with the new terms. The firm “plans to drop its opposition to the merger,” according to Bloomberg.

Bloomberg added that Roy Behren was also happy with the new terms. Behren manages MetroPCS’ shareholder Merger Fund, which along with another shareholder, GS Master Trust, had sued MetroPCS executives for behaving “recklessly” and in “disregard for their duties.”

Deutsche Telekom and MetroPCS announced Oct. 3, 2012, that the boards of each had unanimously approved a merger. MetroPCS would receive $1.5 billion in cash and a 26 percent share of the new company, compared to Deutsche Telekom’s 74 percent.

The new company, they announced, would be the “value leader in wireless with the scale, spectrum, and financial and other resources to expand its geographic coverage, broaden choice amongst all types of customers, and continue to innovate, especially around the next-generation LTE network.”

The deal was approved by the Federal Communications Commission, the Department of Justice and the Committee on Foreign Investment. MetroPCS’ shareholders are the final group whose approval is required for the deal to go through.

While the concession from the German carrier seemed to arrive at the 11th hour, it’s actually the group in charge of calculating the votes, many of which were cast prior to April 12.

Bloomberg reported April 10 that with this “early warning” measure in place, Deutsche Telekom could “delay the final tally if victory appears unattainable.”

It appears its victory will soon be assured.