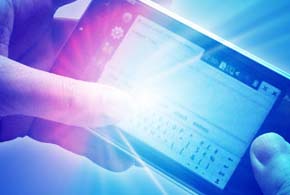 A common wisecrack about the Apple iPhone (and indeed many smartphones) is that users always need to be close to a power source due to the limited battery life.

But now a new chip could dramatically extend the battery life of the smartphone and even save energy for mobile phone base stations.

Eta Devices first revealed its technology back in November 2012 when it said it was testing the new chip after lab tests showed a 50 percent reduction in power consumption.

But now the company has fully developed the smartphone chip, and a shoebox-sized module for base stations. The new technology is based on nearly a decade of research conducted at MIT.

Eta developed the new technology because existing power amplifiers are essentially hopelessly inefficient. When a smartphone sends data, the power amplifiers tend to remain at maximum voltage, eating away power at a frightening rate. There is equally bad news with mobile phone base stations, where the power amplifier there tends to consume as much as 75 percent of the electricity draw.

And more than half of that power consumption is wasted as heat.

The Eta chip however is designed to “switch gears” to adjust voltage supply to power amplifiers as required, cutting down on the energy consumption.

“You can look at our technology as a high-speed gearbox that, every few nanoseconds, modulates the amount of power that the power amplifier draws from the battery,” MIT quoted Joel Dawson, the CTO at Eta Devices. Dawson is also a former associate professor of electrical engineering and computer science who co-invented the technology.

“That turns out to be the key to keeping the efficiency very high,” said Dawson.

Eta reportedly trialed its base station module last year, and it became the first transmitter for 4G LTE networks to achieve an average efficiency greater than 70 percent. “The highest number we’ve heard before that was 45 percent—and that’s probably being generous,” Dawson reportedly said.

So, not only could the chip prolong smartphone battery life, but it could also save millions (as much as $100m/£62m per year) for base station operators, by dramatically cutting their electricity bill.

Eta is not alone here. In 2012, Scottish scientists from Edinburgh-based Sofant Technologies unveiled a design for a miniature antenna that could transform the performance of smartphones and tablets.

That revolutionary antenna was the result of seven years of hard work by the team that emerged from University of Edinburgh. The technology combines tunable RF Micro-Electro-Mechanical System (RF-MEMS) modules and Sofant Intelligent Software to take advantage of the full potential of Long Term Evolution (LTE) and 4G connectivity.