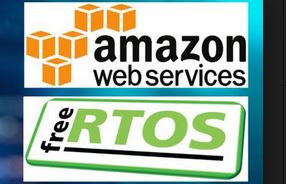 Amazon Web Services, in addition to all the frontline cloud services it offers, also has been moving steadily into the huge infrastructure greenfield of the internet of things. The real question is: Who isn’t at this point, and if you’re an enterprise watching all this from the sidelines … well, what are you thinking?

The huge cloud services provider on Aug. 28 launched to general availability a new OTA (over the air) update to Amazon FreeRTOS, an operating system for microcontrollers that enables low-powered connected devices. It will serve as an IoT backbone that connects such items as appliances, fitness trackers, industrial sensors, smart utility meters, security systems and a long list of others.

Designed for use in small, low-powered devices, Amazon FreeRTOS over-the-air updates extend the FreeRTOS kernel with libraries for communication with cloud services such as AWS IoT Core and with more powerful edge devices that are running AWS Greengrass.

Unlike more powerful, general-purpose computers that require generous amounts of local memory and storage and the ability to load and run code on demand, microcontrollers are often driven by firmware that is loaded at the factory and then updated with bug fixes and new features from time to time over the life of the device.

As most IT hardware people know, some devices are able to accept updates in the field while they are running, while others must be disconnected, removed from service and updated manually. This can be disruptive, inconvenient, and expensive–not to mention time-consuming.

AWS, with FreeRTOS, is designed to remedy these situations with the following:

Over-the-Air Updates: Amazon FreeRTOS now has an over-the-air update mechanism that can be used to deliver updates to devices in the field. Here are the most important properties of this new feature:

Security: Updates can be signed by an integrated code signer, streamed to the target device across a TLS-protected connection, and then verified on the target device in order to guard against corrupt, unauthorized, fraudulent updates.

Fault Tolerance: In order to guard against failed updates that can result in a useless, “bricked” device, the update process is resilient and able to handle partial updates from taking effect, leaving the device in an operable state.

Scalability: Device fleets often contain thousands or millions of devices, and can be divided into groups for updating purposes, powered by AWS IoT Device Management.

Each device must include the OTA (over the air) Updates Library. This library contains an agent that listens for update jobs and supervises the update process.

For more information on AWS’s distribution of FreeRTO, go here. Here is a tutorial on OTA technology. Check out AWS’s tutorial on FreeRTOS.