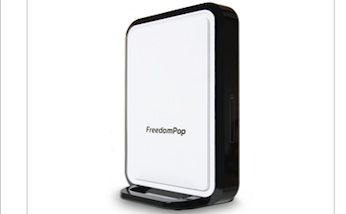 FreedomPop is going after the Internet customers of Comcast, Time Warner and others with a compelling offering: free in-home wireless Internet service at 4G speeds.

Backed by Skype co-founder Niklas Zennstrom, the mobile broadband provider began taking orders Dec. 12 for its Hub Burst, an $89 modem that will begin shipping in January. With the modem, which up to 10 WiFi- or Ethernet-supporting devices can connect to, users get 1GB of free data per month. Those requiring more data can sign up for additional gigabytes, starting at 10GB for $8.99 a month.

There’s no contract—users can cancel at any time, and if they do so within a year, they can receive their $89 back. The 4G services is made available through a partnership with WiMax provider Clearwire, though the company plans to transition to Sprint’s Long Term Evolution (LTE) network in 2013, enabling it to offer the service in more areas.

“You’ve got this opportunity to cut 80 percent of your cable bill,” Stephen Stokols, FreedomPop’s CEO, told Bloomberg. “The carriers are going to hate us. We are going to be stealing their share and their customers.”

“FreedomPop is best positioned for folks that are not heavy users of data, and who are more budget-conscious,” Ken Hyers, an analyst with Technology Business Research, told eWEEK. “For those customers, it will be a great alternative.”

FreedomPop can be “disruptive” like prepaid wireless service, according to Hyers.

“It won’t appeal to the premium customer, but it will definitely peel away customers on the edge, especially those who have a hate-hate relationship with their cable provider—and really, isn’t that most of us?” said Hyers.

While still in beta, the new service will be FreedomPop’s second major offering. In October the company, which was founded in July 2011, began offering a 4G Sleeve—a sort of attachment for the fourth-generation Apple’s iPod Touch, which acts as an always-with-you 4G hotspot. The Sleeve is priced at $99, offers $500MB of free monthly data but also comes with hefty overage fees, according to Engadget—$20 per gigabytes for those on free plans and $10 per gigabyte for those paid plans.

“Until today, the iPod Touch has been a WiFi-only device,” Mauricio Sastre, vice president of products at FreedomPop, said in an Oct. 29 statement. “By leveraging a VoIP [voice-over-IP] app such as Skype, the iPod Touch essentially becomes a carrier-free option that allows consumers to enjoy an iPhone-like experience without signing contracts or paying monthly fees.”

Co-founder Stokolos told Bloomberg that the company has already received $7.5 million in venture capital funding and expects to bring in another $15 million to $20 million by early 2013.

“FreedomPop’s early successes [have] validated consumers are looking for more convenient and affordable ways to consume data,” Stokolos told Cnet. “We’ve already given away more than 15 million MBs of free data and are expanding our beta to meet the increased demand this holiday season.”

The Hub Burst, he added, gives consumers a “compelling alternative.”

FreedomPop’s transition from Clearwire to Sprint may be an even more seamless one. According to reports, Sprint, which currently owns a majority share of Clearwire, is in talks to take over it completely.

Sprint is newly in a position to chase such a deal. On Oct. 15 it announced that it had sold a 70 percent share of the company to Japanese wireless carrier Softbank for $12.1 billion, $8 billion of which has been earmarked for 4G-related investments.