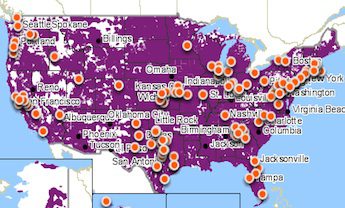 Sprint continues to play catch-up to the Long Term Evolution efforts of larger competitors Verizon Wireless and AT&T, but it’s making good time. Sprint’s LTE network is now in 49 markets, including Dallas, Atlanta and Baltimore, and it has plans to light up nearly 150 more in the “coming months,” it announced Dec. 19.

In addition to their strides in LTE, Sprint officials said the company has also beefed up thousands of 3G sites across the country, made thousands of voice and data capacity additions, and implemented “3G service improvements” in more than 70 markets, including Asheville, N.C.; Philadelphia; and Santa Barbara, Calif.

Bob Azzi, senior vice president of network at Sprint, after pointing out that Sprint is the only major carrier to pair LTE with unlimited data plans, said in a statement that the carrier is on “an aggressive path to complete the rollout of Network Vision and we expect to accelerate this momentum in 2013.”

Network Vision is Sprint’s plan for closing down its Nextel network and consolidating multiple network technologies—3G, WiMax and LTE—into one seamless network with improved efficiency and quality.

In the last quarter of the year, Sprint has made considerable progress toward that agenda, first by selling a majority share of the company to Japanese wireless carrier Softbank for $20.1 billion. Softbank has expertise in rolling out LTE, and the $8 billion of that $20.1 billion that won’t be going to Sprint stockholders will help to finance and expedite its 4G rollouts.

In mid-December, Sprint made its second major deal, seeking to buy out partner Clearwire, of which it already owned a 50-plus percent share, for $2.2 billion. The deal will give Sprint Clearwire’s 4G WiMax network and considerable spectrum holdings—which, according to Clearwire, are larger than anyone’s in the industry. That spectrum will also be improved by being combined with Sprint’s current spectrum.

“Sprint’s Network Vision architecture should allow for better strategic alignment and full utilization and integration of Clearwire’s complementary 2.5GHz spectrum assets, while achieving operations efficiencies and improved service for customers as the spectrum and network is migrated to LTE standards,” the companies said in a joint Dec. 17 statement.

Such changes will be especially welcome in the new year, as Sprint will face a large, more competitive T-Mobile, emboldened by its merger with MetroPCS, and an AT&T with both new spectrum acquisitions and plans for a greater LTE expansion and services such as cloud-based home security, the Connected Car and the Connected Home—which should help it reduce churn.