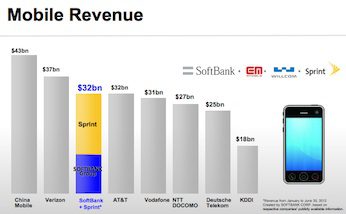 Sprint’s stockholders will receive $12.1 billion, while $8 billion will go toward Sprint’s balance sheet and its efforts to roll out a 4G Long Term Evolution network. An LTE network is critical to Sprint’s ability to support the next generation of smart devices and to compete against Verizon Wireless and AT&T, the two leading U.S. carriers, which have 111 million and 105 million subscribers, respectively, to Sprint’s 56 million.

Softbank plans to form a new U.S. subsidiary, called New Sprint, which will become a publicly traded company, while Sprint will remain a wholly owned subsidiary. Current Sprint CEO Dan Hesse will become CEO of New Sprint, as well as one member of a 10-member board. Both parties expect the deal to close in mid-2013.

In addition to cash—sorely needed by Sprint—the deal will bring to Sprint Softbank’s expertise in LTE, as well as the learned experience of how to turn around a carrier. Softbank was created through the purchase of Vodafone’s Japanese business unit, and it has since increased its operating income from $1 billion to $5.5 billion.

“As we have proven in Japan, we have achieved a V-shaped earnings recovery in the mobile business and grown dramatically by introducing differentiated products to an incumbent-led market,” Softbank CEO and Chairman Masayoshi Son said in an Oct. 15 statement. “Our track record of innovation, combined with Sprint’s strong brand and local leadership, provides a constructive beginning toward creating a more competitive American wireless market.”

Sprint’s Hesse was hired in 2007 to save the carrier after what turned out to be a disastrous purchase of Nextel, which is based on technology that’s incompatible with Sprint’s. Hesse introduced a three-part plan—in the simplest terms: recovery, investment and margin expansion—that’s been working. The success of Sprint’s stock raised rumors in recent weeks that Sprint was ripe for an acquisition, and it was said to be revisiting talks about whether to purchase No. 5 U.S. carrier MetroPCS. The Softbank deal comes, appropriately, during the second phase of Hesse’s plan.

“This is a transformative transaction for Sprint that creates immediate value for stockholders, while providing an opportunity to participate in the future growth of a stronger, better capitalized Sprint going forward,” Hesse said in the statement.

During a Webcast Oct. 15, Hesse added that the deal in no way changes Sprint’s current relationship or obligations with Clearwire, whose WiMax technology enabled Sprint to offer 4G speeds ahead of Verizon and AT&T. Clearwire has since committed to rolling out LTE alongside its WiMax network.

While stockholders were sure to come out on top, in this instance subscribers will also gain, said Technology Business Research analyst Ken Hyers.

“While some acquisitions are arguably not of obvious benefit to consumers, this one is unquestionably good for them,” Hyers told eWEEK. “While Sprint has historically offered its customers some of the most generous data plans of any national operator, its lack of nationwide LTE coverage has caused many consumers to choose other carriers. With more secure financial footing, Sprint will be able to move more aggressively toward building out a nationwide LTE network, acquire the spectrum it needs, and potentially become a genuine competitive threat to AT&T and Verizon Wireless.”

Subscribers should begin to see the difference in 2013, though it’s unlikely Sprint will complete its LTE build-out before 2014. Additionally, said Hyers, “We could also see smaller regional carrier acquisitions by Sprint after the SoftBank deal closes next year.”

The deal would seem less advantageous on the Softbank side, though it gives the company a hand in the robustly growing U.S. smartphone market.

“Softbank is loading up with huge debt to buy Sprint, so Softbank must be mindful not to get overloaded by its commitments,” said Neil Mawston, executive director of Strategy Analytics’ Global Wireless Practice, told eWEEK. “A merger with Softbank gives Sprint more buying power for devices and infrastructure, which will trim costs, but Sprint will still have fewer subscribers in the U.S. and may lack the marketing clout to compete.

A combined Softbank and Sprint, the companies said in their Webcast, will have a user base of 96 million subscribers.

Hesse added in the statement that Sprint’s management team is excited to work with Softbank to “build out our advanced LTE network, improve the customer experience and continue the turnaround of our operations.”