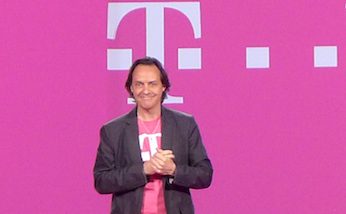 NEW YORK—T-Mobile CEO John Legere on March 26 spelled out, with what’s quickly become a trademark mix of frankness and sass, what T-Mobile is now offering and where it’s going.

The top executive of the nation’s fourth-largest carrier—with an acquisition of fifth-largest carrier MetroPCS in the works—said (again) that current wireless carrier practices have “America angrier than those birds and grumpier than that cat,” and T-Mobile is here to “do something different.”

Far behind in the 4G Long-Term Evolution race, it has turned on its LTE network in seven markets—Baltimore; Houston; Kansas City; Las Vegas; Phoenix; San Jose, Calif.; and Washington, D.C.— with more on the way. By midyear, T-Mobile plans to cover 100 million people and by year’s end, 200 million. And when a user finds herself outside of an LTE area, the speed won’t completely fall off, Legere insisted—T-Mobile will also have 200 million people covered with HSPA+.

Other major news: The iPhones are coming. Finally. T-Mobile will begin selling the Apple iPhone 5 April 12. More, it’ll be an improved iPhone 5, able to take advantage of more spectrum bands.

“I’ve been telling you that when the iPhone comes to T-Mobile, it would be different,” Legere said. “The experience on this Phone is going to be beautiful from day one.”

Chief Marketing Officer Michael Sievert added that T-Mobile’s iPhone users will have “50 percent more bandwidth than on AT&T—it’s like having an HOV lane.”

More news: As of March 26, the carrier is selling the BlackBerry Z10, and coming soon are the Samsung Galaxy S 4 and the HTC One—all of which will be available at a $99 “out the door” price. That means $99 down and a $20 monthly payment for 20 months.

And here Legere wanted to make perfectly clear what T-Mobile is doing.

He disputed earlier reports that T-Mobile is becoming a prepaid carrier or just dropping the subsidies and spreading out the device costs. What T-Mobile is doing, he said, is separating data plans from device sales, and selling devices for less.

“One of the main things to take away here,” he said, “is it’s just an amazing deal.”

T-Mobile is now offering monthly plans for $50, $60 or $70 a month, the latter of which is completely unlimited. When pressed about its Fair Use policy—the right to “throttle,” or slow, the speed of a customer using too much data—Legere said the company hadn’t done this yet, and it literally has a few customers using 50GB a month.

If it’s 3 a.m. and you’re having a party and using 70GB of data, “I don’t care,” said Legere, “as long as it doesn’t affect the network experience of other customers.”

Should an instance arise when T-Mobile decides to invoke Fair Use, Legere said he’d be happy to make that public.

Its device sales, again, are separate from its contracts. People can bring their own compatible devices and sign up for a data plan or, if they pass a credit check, sign up for a monthly payment (while an iPhone 5 would be $20 a month, monthly payments for other devices could be as low as $5 a month).

If someone decides to pay for the device outright, no problem, Legere said. If he decides to leave T-Mobile and use the phone on another network, that’s fine, too.

The customer also has the option of selling the phone back to T-Mobile, to bring down the remainder of what’s owed. If he stays and gets bored with that device or the next generation of that device arrives, it can be traded up—a component of its offer that T-Mobile is working on to simplify even further, the CEO said.

Regarding the pending MetroPCS deal, Legere insisted that it will close—”despite the greedy hedge funds trying to take a double dip”—and that everything introduced March 26 is about T-Mobile and how it will compete moving forward.

“This is about us deploying our network. This is all before the extremely complimentary spectrum coming from MetroPCS.”

T-Mobile wants to instigate major change in a reluctant-to-change industry, and with its LTE network starting to go live, Legere insisted the company is ready.

Kicking off his presentation, he rolled a new Wild West-style commercial that will soon begin airing. In it, one of four horse-mounted bad guys riding into a trembling town has a change of heart, deciding he wants to do things differently, and dons a T-Mobile-pink hat.

The cowboy thing is about, “finally, one of the wireless carriers is going to stop preventing people from getting what they want,” Legere said.

He grinned and added, “That nasty guy on the end is Sprint—you’ve got to know that, right?”