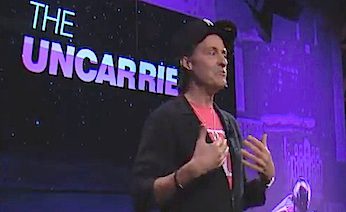 T-Mobile CEO John Legere finished out 2012 with big promises of turning T-Mobile into the un-carrier and upending the mobile industry. At the 2013 Consumer Electronics Show, Legere made considerable strides toward accomplishing that—as well as establishing that the un-carrier has an un-CEO.

(Mobile World Live captured a portion of the keynote on video, and it’s worth watching. Legere starts speaking around the 1:10 mark.)

The media’s delight in Legere, however, may have somewhat overshadowed T-Mobile’s actual announcements, which are worth noting. Not only has the carrier done away with “throttling”—the practice of slowing down user speeds after they pass an allotted data amount—but it has done away with contracts. Sprint also offers unlimited data—not throttling was the one feature it had on T-Mobile, and it played that up in its ads. But in pairing unlimited with un-throttled, contract-free service, T-Mobile has no competition.

On Jan. 9, T-Mobile officially launched an Unlimited Nationwide 4G Data Plan, with no annual contract, for $70 a month.

“Simply put, consumers want their data to be blazing-fast, without limits and without overages … that’s exactly what we’re giving them, and for the first time, we’re offering it without an annual contract,” Mike Sievert, T-Mobile’s chief marketing officer, said in a statement. “Other carriers want to lock customers in; we’re going to earn our customers’ business with an amazing 4G experience every day.”

In another first for the U.S. market, T-Mobile announced that as of Jan. 11, HD Voice is available to capable smartphones across its nationwide network.

To experience HD Voice, both parties on a call must have phones capable of supporting the capability. For now, that means the Samsung Galaxy S, the HTC One S and the Nokia Astound.

Finally—and yet another first—T-Mobile has also introduced 4G Connect, a program that offers 4G connectivity as a free, standard service on select notebooks, tablets and Ultrabooks. Consumers who buy the select devices can access T-Mobile’s 4G network out of the box, with no need for additional equipment or a contract. (There’s no need to be a T-Mobile subscriber.)

For now, the devices include some Windows 8-running notebooks and Ultrabooks from Hewlett-Packard and Dell, such as the HP Pavilion dm1 and the Dell Inspiron 14z Ultrabook. Qualcomm officials say more Gobi-enabled devices, and Windows RT-running devices will be added to the list soon.

Pricing will vary, and the 4G service in some cases is offered for a length of two years. Data isn’t unlimited, and in some cases, users can purchase no-contract passes that start at $10 per GB.

“Our goal is to have a ‘walk out working’ experience and not be constrained to Wifi to have a data connection,” Legere said in a statement. The program, he added, “is an innovative, industry-first experience that makes it easier than ever for customers to get that data access solution right out-of-the-box at no extra cost, and in retail environments where they already shop for these devices: national retail stores and online.”

As Legere said during a December 2012 talk—and T-Mobile’s newest advertisements have enforced—the carrier is ready to be edgier, cooler and “more memorable.” In a market of consumers frustrated by contracts and rising prices, T-Mobile says it’s no longer playing the nice girl.