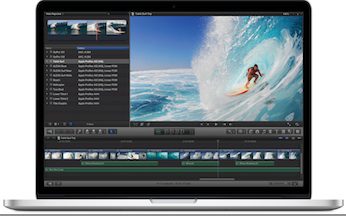 Apple also upgraded the 15-inch MacBook Pro with Retina display, which now features a faster 2.4 GHz quad-core processor, and the flagship 15-inch notebook comes with a new 2.7 GHz quad-core processor and 16GB of memory. Apple also announced that the 13-inch MacBook Air with 256GB of storage has a new lower price of $1,399. All models are available through the company’s online store, retail stores and authorized resellers.

Measuring a mere 0.71 inches and weighing only 4.46 pounds, Apple claims the MacBook Pro Retina display is the world’s highest resolution notebook display with more than 5 million pixels, 3 million more than a high-definition television. At 220 pixels-per-inch, the Retina display’s pixel density is so high that the company says the human eye cannot distinguish individual pixels from a normal viewing distance.

The upgrade and discount comes as a recent report from IT research firm NPD Group found MacBook sales from Nov. 18 through Dec. 22 holiday shopping season were lower than the same period in 2011—a six point slide. However, Apple fared better than manufacturers selling Windows-based notebooks, which saw an 11 percent drop year-over-year, despite the highly anticipated launch of Microsoft’s Windows 8 operating system.

Meanwhile, another Apple product, the iPad line of tablets, continues to cut into low-end notebook sales, which were off 16 percent compared with 2011, according to the NPD report. During the holiday season, consumers no longer viewed PCs as the No. 1 gift item, and analysts said while there was uptake of very-low-priced notebooks as a part of mega-holiday deals, this uptake did little to boost holiday PC sales, according to a January report from IT research firm Gartner.

“Tablets have dramatically changed the device landscape for PCs, not so much by ‘cannibalizing’ PC sales, but by causing PC users to shift consumption to tablets rather than replacing older PCs,” Gartner Principal Analyst Mikako Kitagawa said during the report’s release. “Whereas once we imagined a world in which individual users would have both a PC and a tablet as personal devices, we increasingly suspect that most individuals will shift consumption activity to a personal tablet, and perform creative and administrative tasks on a shared PC.”