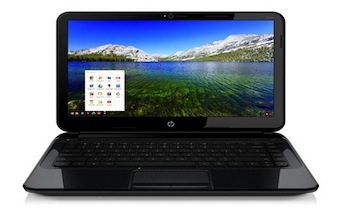 Technology giant Hewlett-Packard officially jumped on the Chromebook bandwagon with the release of the HP Pavilion 14, which boasts a 14-inch display that’s approximately 2 inches wider than other Chromebook notebooks currently on the market. The notebook carries a starting price of $329.99.

“Google’s Chrome OS is showing great appeal to a growing customer base,” Kevin Frost, HP’s vice president and general manager of consumer PCs, printing and personal systems said in a statement. “With HP’s Chromebook, customers can get the best of the Google experience on a full-sized laptop, all backed up by our service and brand.”

Weighing in at just under 4 pounds, the notebook also offers an array of ports including High-Definition Multimedia Interface (HDMI), USB 2.0 and Ethernet jack, and a combination headphone and microphone jack allow for connections to displays and other devices. Other features include up to 4GB of memory, a removable battery with up to 4 hours and 15 minutes of power, an HP TrueVision HD Webcam and 100GB of free storage on Google Drive for two years.

Users can also visit the Chrome Web Store to customize their Chromebooks by downloading applications for work or play. Constant automatic updates to applications and the Chrome OS mean that software and security are kept up-to-date, while providing a gateway to the Google experience with applications like Search, Gmail, YouTube, Google Drive and Google+ Hangouts for multi-person video chat.

While it’s too early to tell whether HP’s entry into the Chromebook space will pay off, computer maker Acer recently told Bloomberg News that the company is having success with its own brand of notebooks running Google’s Chrome operating system. Acer president Jim Wong told the news service Chrome-based models accounted for 5 percent to 10 percent of Acer’s U.S. shipments since being released there in November.

In general, Chromebooks are known for their comparatively low cost and fast startup times. The devices are designed to be used while connected to the Internet and support applications that reside on the Web, rather than traditional PC applications like Microsoft Office and Photoshop that reside on the machine itself. The low cost and simplicity of Chrome has made the machines an attractive alternative to more costly Windows 8 devices, as noted by Wong, who said Chrome’s additional value is that it’s more secure.