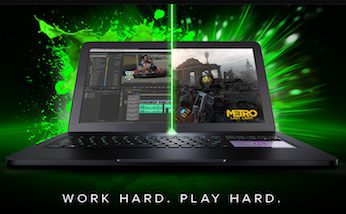 The Blade, measuring 0.66 inches thin, is powered with the same Intel Core processor as the Blade Pro, as well as the same GeForce GTX 765M graphics processing unit (GPU). The notebook uses solid-state storage technology with boot speeds of up to four-times faster than a traditional 5,400 rpm notebook hard drive. Available for preorder starting June 3, the notebook starts at $1,799.

The Blade also sports a rigid all-aluminum chassis, with a 14-inch LED-backlit HD+ display with a native resolution of 1600 by 900, and features a custom-designed trackpad and backlit gaming-grade keyboard that has full anti-ghosting capabilities and programmable keys powered by Synapse 2.0.

“We’ve designed and built the thinnest, most powerful 14-inch laptop in the world,” Min-Liang Tan, Razer co-founder, CEO and creative director, said in a statement. “Thinner than a dime and more powerful than other traditional desktop replacements today, we’ve created an entirely new category of thin and powerful laptops that is generations ahead of other PCs.”

At 0.88 inches thin and weighing 6.5 pounds, the Blade Pro is designed for portability and performance—the Pro also features 8GB of 1,600MHz DDR3L memory and comes standard with 128GB of total solid-state storage, with optional 256GB and 512GB SSDs. Also available for preorder starting June 3, the Blade Pro carries a starting price of $2,299.

At the heart of the Pro is a full-high-definition 17-inch LED display linked in combination with the Switchblade User Interface (SBUI). Driven by 10 dynamic adaptive tactile keys, a LCD track pad and a variety of apps, the SBUI now includes several new apps and an array of new tools—such as Adobe Photoshop and Adobe Premiere Pro, Maya and GIMP—at no charge.

The notebook features a 47-watt Intel chip, 10 watts more than the last 17-inch Blade and the most powerful central processing unit (CPU) ever fitted into a Razer, the company noted. The latest Nvidia GeForce GTX 765M GPU is also included, as is the Razer Synapse 2.0 anti-ghosting keyboard and the Dolby Home Theatre v4.

“Innovation is happening across the PC industry, and what Razer has done with the Blade Pro is groundbreaking,” Navin Shenoy, vice president and general manager of Intel’s mobile client platforms division, said in a statement. “Utilizing a future 4th gen Intel Core processor, the Razer Blade Pro delivers top-class gaming and professional performance in a very portable form factor.”