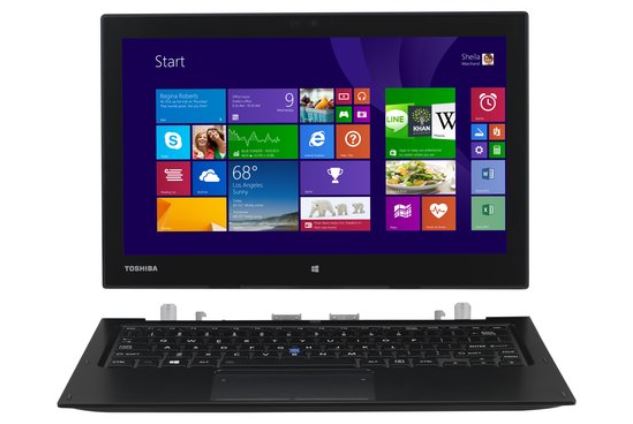 Ironically, while the PC and tablet markets have suffered sales slowdowns the last two years, the nascent PC tablet market — PCs that can that also serve as tablets — is growing. This is because users are discovering versatility in a device is a valuable attribute.

Microsoft’s Surface, thanks largely to the company’s massive marketing and advertising machine, is the best known and is the top seller in this genre. Lenovo’s ThinkPad Yoga is generally considered the second-best in the market by specialized publications such as Computer Shopper and Tablet PC Review; HP’s Spectre 360 is a close third. These ratings, however, are always subjective and certainly not tech gospel, by any means.

Toshiba, Asus, Dell, Sony and Fujitsu are also players in this market. They all make touchscreen laptops or notebooks with monitors that can either separate from the laptop body to serve as a tablet, or fold all the way back to serve as a de facto tablet.

This review is about Toshiba’s Portege Z20t-B, a 12.5-inch, solid-state hybrid aimed at enterprise users from the first category above. Overall, this is a competitive little convertible with plenty of horsepower and storage, good ease of use, responsiveness, a sharp display, and relatively few flaws.

The size and design is perfect for travel; as a laptop, the 12.5-inch monitor and body size fits in well on a commercial aircraft — even in tight coach seats with the seat ahead of you tilted back. Having the tablet option provides extra convenience in such a crowded space. If you’re not interested in the movies or TV shows offered on the flight, just load up the Portege and watch what you want to watch, as either a laptop or tablet.

As is standard with most laptops, the Z20t-B comes with several configuration choices — several options in processors, random access memory (RAM) and storage capacity. The Z20t-B reviewed here features a 1.20GHz Intel Core M 5Y71, 8GB of memory and a 226GB SSD — all more than enough to handle most enterprise-type functions.

Operating system: The Portege Z20t-B comes installed with Windows 8.1, but most users probably won’t keep that around for long with Win 10 still available for free upgrade.

Performance: This device’s finest characteristic, and no doubt the most important. The instant-on and the shutdown are both fast, as befits a good solid-state PC. The keyboard is of high quality; the keys are large and have plenty of “give,” so typing is fast and comfortable. When serving as a laptop, the hinges prop up the keyboard a bit, making typing even more comfortable. The keyboard is a notable improvement over Toshiba’s other laptops.

Handling: This isn’t the lightest notebook one can buy, but lighter weight may be overrated. It’s easy to handle and pack away for a trip. Slightly thicker than the iPad Air 2 or a HP EliteBook, the Portege is nonetheless a sophisticated-looking notebook.

Connectors: The designer provided the slight extra width so that the unit can hold more connections than most thin convertibles. The Portege Z20t-B has a microSD slot, a micro HDMI port and a micro USB2 connector. None of the higher-rated convertibles has that complete array of connectors.

Monitor: The 12.5-inch screen has a resolution of 1920×1080 pixels. This pixel density of 176ppi is low compared to iPads and many Android tablets, but it is higher than most Windows tablets and laptops. Overall, it’s a clean, sharp display with colors that are true.

Touchpad: The touchpad on the monitor needs some more development. Some buttons required more pressure than others, and some were not responsive without an extra touch or two. This can be aggravating if the user is under pressure or in a hurry. However, these touch-related problems apparently are not uncommon on Windows laptops. Slowing down and being more deliberate with typing is the way to go.

Connecting the monitor and the keyboard: Users will have to get used to making sure the monitor and keyboard connect correctly. You cannot do this operation quickly. The tablet monitor fits over two hook type connectors on the keyboard dock, and users must realize that they should take an extra few seconds to make sure that the unit is tight. If not connected completely, the docked tablet won’t recognize the keyboard dock or will recognize it only intermittently. No problems if it’s put together correctly.

Power plant: The Portege’s Intel Core M processors run browsers, word processors, video and all other business apps quickly and efficiently. They’re also power-efficient enough that they don’t require cooling fans, and I didn’t detect any hot spots on the bottom of the unit, even after several hours’ use.

Battery performance: Intel’s power-efficient Core M 5Y71 demonstrates the continued evolution of the company’s processors in the Portege’s battery life. The Portege has the longest-lasting power pack I have ever tested. The battery lasted as long as 11 hours in light usage tests — such as Web browsing, document creation, etc. — and eight hours when continually playing video.

Important notes: The on button is located on the monitor/tablet and is difficult to find — even after you’ve used the unit for a while — due to its minuscule size. Conversely, the power plug-in is located on the keyboard and not on the tablet; this means it’s probably not a good idea to take the tablet separately anywhere. Users must have the keyboard dock along to charge the battery — even if you only want to use it as a tablet.

Pricing: The Portege is a little on the expensive side, but in the long run, most users should realize that it was worth it. Depending upon what you choose to put into it and add on, a Portege Z20t-B can run anywhere from $950 to $1,700.