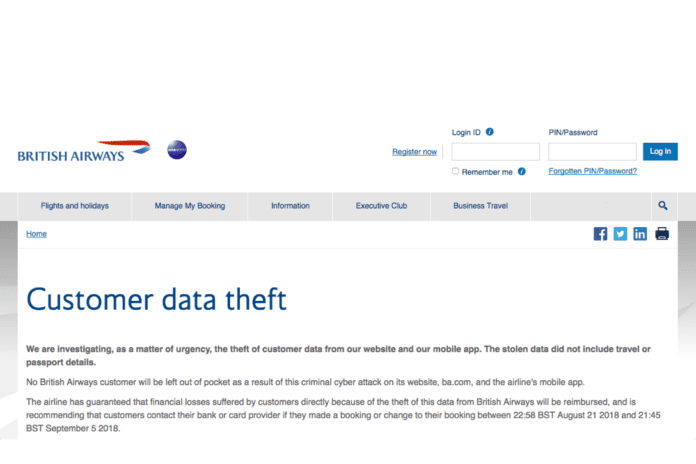 British Airways disclosed on Sept. 7 that it was the victim of a data breach that exposed details on 380,000 customers.

The breach involved data from British Airways’ mobile application and website at ba.com. The airline noted in its advisory that stolen data did not include customers’ passport information or travel details. However, hackers stole names, addresses and payment card details of customers who used the British Airways website or mobile app between Aug. 21 and Sept. 5.

“We are investigating, as a matter of urgency, the theft of customer data from our website and our mobile app,” British Airways wrote in an advisory. “The airline has guaranteed that financial losses suffered by customers directly because of the theft of this data from British Airways will be reimbursed, and is recommending that customers contact their bank or card provider if they made a booking or change to their booking between 22:58 BST August 21 2018 and 21:45 BST September 5 2018.”

The British Airways breach is the second in as many weeks that has involved a major international airline. On Aug. 29, Air Canada reported that its mobile app was breached, potentially exposing 1.7 million accounts to risk. Air Canada, however, estimated that information on only 20,000 customers accounts was stolen in the breach, which is thought to have taken place between Aug. 22-24.

Neither Air Canada nor British Airways has publicly revealed how their respective services were breached.

“British Airways continues to investigate with the police and cyber specialists, and has reported the data theft to the Information Commissioner,” the company’s advisory stated.

While British Airways has not publicly revealed how it was exploited, Leigh Anne Galloway, cyber-security resilience lead at Positive Technologies, told eWEEK in an email that the fact that the attack exploited vulnerabilities on BA’s website and app gives us a picture of how the data breach occurred. Positive Technologies released a report on June 19 that found that 44 percent of web apps left user data at risk of theft, she said.

“This event is a case study example of why web app security and preventing access to data is so crucial,” she said. “It is crucial that companies monitor their web application and patch vulnerabilities immediately.”

The British Airways breach could potentially be the first major test for the European Union’s General Data Protection Regulation (GDPR), which went into effect on May 25. GDPR has strict requirements on disclosure of breaches, and non-compliance could result in costly financial penalties.

“It appears that the company notified the Information Commissioner’s Office and customers within the GDPR’s mandatory 72 hours, but the breach will now be investigated and the company could be penalized if it failed to take all the necessary measures to protect customer data,” Randy Abrams, senior security analyst at Webroot, wrote in an email to eWEEK.

Anupam Sahai, vice president of product management at Cavirin, commented via email that with hackers constantly probing pretty much every corporate website for security gaps, and the travel industry, with all of its interconnections, ripe for attack, it is imperative that organizations leverage all the tools at their disposal to protect their cyber-posture.

“Though it hasn’t been announced if it was a patching issue, an insider oversight, compromised data in the cloud, a third-party breach or something else, security in depth requires protection of the complete hybrid infrastructure, as well as any vendors,” Sahai said. “For British Airways in particular, additional protections are even more urgent given GDPR.”