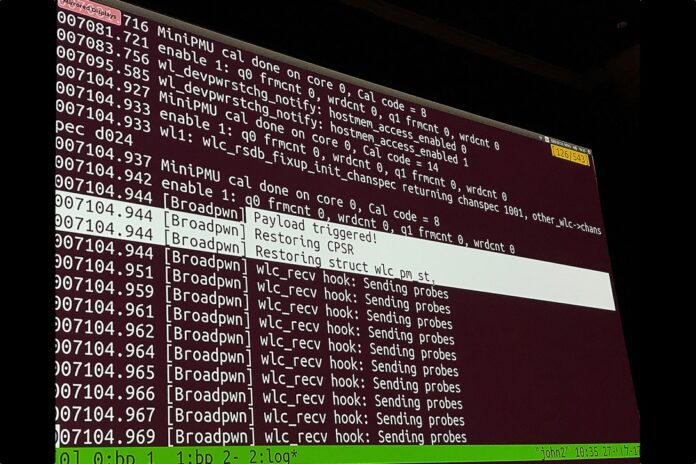 LAS VEGAS — For the last few months the two primary mobile operating system vendors Google Android and Apple IOS have scrambled to patch a flaw that could have left all their users at risk from a critical remote exploit vulnerability, known as Broadpwn.

Today in a standing room only session at the Black Hat USA conference here, Nitay Artenstein, security researcher at Exodus Intelligence detailed how he discovered Broadpwn and what could have happened had a malicious hacker found it first. Artenstein responsibly disclosed the Broadpwn flaw to the impacted vendors who patched the issue prior to his disclosure at Black Hat.  Apple updated for the flaw on July 19, while Google patched Android several weeks earlier as part of the Android July patch update.

The Broadpwn WiFi issue is also identified as CVE-2017-9417 and is a vulnerability in Broadcom’s WiFi chipset code. The flaw as outlined by Artenstein in his presentation today is a remotely exploitable buffer overflow that could have enabled arbitrary code execution. As part of his presentation, Artenstein suggested that a Broadpwn exploit could be written that would enable a WiFi worm that would infect one user and then continue to spread.

The discovery of Broadpwn by Artenstein was no accident. He explained that he was specifically looking to find a remote exploit that would have broad impact.  For Artenstein, a remote exploit is an attack that does not require any user interaction or assumptions about how a system is configured. A remote exploit also should leave the system in a stable running state, such that the attacker can still perform whatever actions they choose on the exploited device.

With WiFi chips, all the major handset vendors use Broadcom chips which provided Artenstein with a potentially lucrative target.  Unlike desktop CPUs, the Broadcom WiFi chip does not have advanced memory protection features like DEP (Data Execution Protection) and ASLR (Address Space Layout Randomization) built-in. Artenstein was able to reverse engineer the source code for the Broadcom WiFi chips and found a simple memory allocation bug that he discovered could be used to trigger the buffer overflow vulnerability that is at the root of the Broadpwn exploit

Simply finding a buffer overflow alone isn’t enough to be a remote exploit, so Artenstein set out to find a way to trigger the overflow and then execute code to enable infections. Artenstein ended up making use of a well known WiFi attack vector known as Karma/EvilAP that will trick unsuspecting access points to connect to a rogue, or evil access point.

In a live demo, Artenstein showed how the Broadpwn exploit works, with his phone associating to the fake access point, which then got infected with the malware code.

“Broadpwn is a perfect bug for the first network WiFi worm,” Artenstein said.