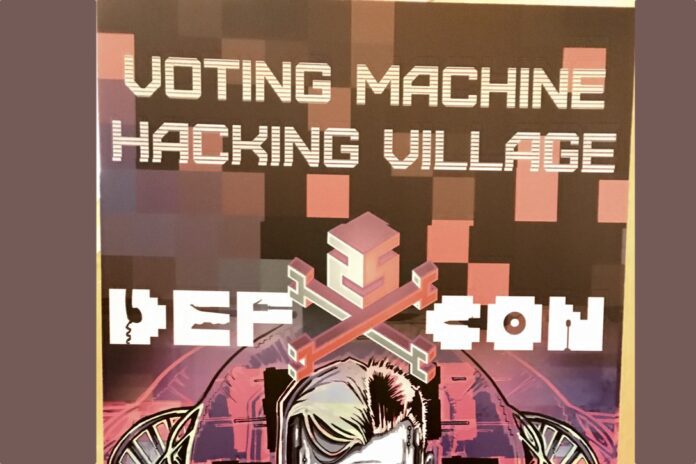 LAS VEGAS—In a small room at the Caesar’s Palace hotel conference center, a series of voting machines were setup as part of the Voting Village at the DefCon 25 hacking conference here, giving attendees the opportunity to find ways to exploit weaknesses in their designs .

Security researcher Carsten Schurmann was able to get remote access to a WinVote machine in the village, that was actually used in a local election in 2014. Schurmann explained to the steady stream of media that came to ask questions that the system had an open port that allowed Windows Remote Desktop sessions.

Schurmann told eWEEK that the port was discovered simply by running the open-source Wireshark network packet capture program. Other hackers in the Voting Village also used Wireshark and also were able to compromise voting machines that had known vulnerabilities simply with the open-source Metasploit penetration testing framework.

In a day-long series of talks in a room adjacent to the one with the voting machines, security and policy experts provided additional insights and direction into the current state of voting machine security.

Harri Hursti, Co-Founder of Nordic Innovation Labs, noted that many voting machines are supposed to have tamper evident mechanisms on them that aim to help guarantee the integrity of a system. The premise of a tamper evident seal is that it shows that the device has not been opened or altered. Hursti noted that with connected devices the tamper evident seal no longer matters much. However, he also suggested that voters check voting machines to see if the seal is intact before casting their votes.

While zero-day and exotic attacks are interesting, Hursti said that hackers aren’t always looking for an elegant way to break into a device, they are just looking for a way in.

“If the front door is locked they look for the back door,” Hursti said.

General Douglas Lute, former U.S. Ambassador to NATO, addressed the Voting Machine Village remotely via Skype. He was originally scheduled to be on site, but slipped a disk in his back and was unable to fly to DefCon for the event.

“Last year’s attacks on the voting process is as serious a threat to our democracy as any I have seen in 40 years,” Lute said.

In Lute’s view, the attacks against the U.S. voting system during the 2016 national election campaign were as serious as any physical attack, or perhaps even more-so. He noted that America is a rich and strong country and can recover from physical attacks.

“But if we lose confidence in the voting process, which is the most fundamental link between the American citizen and his or her government, that is damaging and severe,” Lute said. “This is a serious national security issue.”

Lute emphasized that while Russia was behind the 2016 election hacking, it’s important to deal with the issue now because other nations are watching to see what the U.S. will do. Those other nations could include adversaries like Iran, North Korea or even terrorist groups like ISIS. He emphasized that the next  presidential election in the U.S is in 2020, which isn’t all the long from now.

“Time is short to repair this issue,” Lute said. “The message we’re trying to communicate at DefCon this week is the sense of urgency.”

Voting machine integrity is also an issue beyond the borders of the U.S. as American allies are also at risk. Lute noted that during many elections in his life he was on an offshore deployment somewhere.

“I voted [by] absentee ballot from wherever I was around the world and assumed when I mailed my ballot that voting security was someone else’s job and i didn’t worry about it,” Lute said. “After last year’s experience I don’t feel that way anymore.”

As a final note, Lute encouraged attendees to be active and help protect democracy.

“I hope you will join this effort as technical experts committed to finding good safeguards and security or simply as concerned citizens,” Lute said. “Get involved and let’s get this fixed.”