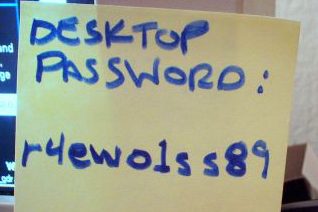 Creating passwords, remembering them and having to update them all the time has been a headache for most people for a long time. Storing passwords in a device or writing them down can become counterproductive, to say the least.

Amid all this anguish, how does struggling with and juggling passwords affect businesses on a daily cumulative basis, when employees have to open apps and devices around the clock? Well, somebody has come up with some research that speaks to this question.

A survey of consumer users, released Oct. 16, conducted by the Widmeyer research firm and underwritten by unified identity management provider Centrify, revealed that companies lose more than $420 of productivity annually per employee due to workers merely wasting time—and taking dangerous shortcuts—in fighting with passwords. For a company with 500 employees, the loss is equivalent to nearly $210,000 per year in productivity, the research showed.
The survey also found that nearly 40 percent of sampled workers enter more than 4,000 passwords a year while accessing applications, wasting a cumulative 24 hours annually in the process. While half of the respondents wrongly believe they have five or fewer online profiles, 37 percent actually create more than 50 new account profiles annually.
That’s certainly not all that ails the password-using world. Employees’ poor password habits have been found to clearly put their employers at risk; nearly half of respondents use their personal devices for business purposes, and more than a third do not use passwords on those devices, even though many keep office email, confidential documents, customer contact info and budget information on them.

“The thing that really jumped out at me was that 25 percent of people basically use the same password across all their Web properties,” Centrify CEO Tom Kemp told eWEEK. “The second one I thought was important is that 38 percent of people do not put a PIN or passcode on their mobile devices. This number will go down as the new iPhones and others come out that force you to do that, but that’s still a pretty high number.”

These findings underscore a crying need for a better approach to passwords, and they pose the question: Can companies afford the double-whammy of security risk alongside the gouge in productivity?

This is all about human nature, which always looks for the quickest, easiest path to get something done.
“The results show that employees, regardless of how often they’re warned of the dangers to their data, opt for convenience over security,” said Jon Oltsik, senior principal analyst at ESG. “Between employees’ lack of diligent password use and their loss of productivity, it has never been more clear that the time has come for companies to move beyond relying on passwords for protecting their applications and data.”
Other interesting metrics from the survey:

–People have very little faith in the absolute security of their passwords because only 12 percent of respondents believe their passwords are very secure.
–People find forgetting passwords more annoying than misplaced keys, dead cell phone batteries and spam email.

The Widmeyer survey was completed in September 2014 with more than 1,000 participants in North America and 1,000 in the United Kingdom. Results were similar across both regions.