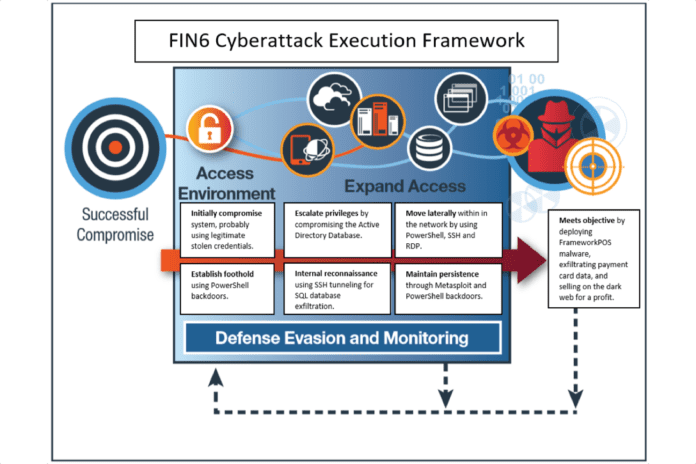 The FIN6 cyber-hacking group has been increasingly attacking point of sale (PoS) systems, according to an IBM report released on Sept. 5.

According to IBM’s X-Force Incident Response and Intelligence Services (IRIS), FIN6 has been using FrameworkPOS and GratefulPOS malware to steal payment card data from PoS systems throughout 2017 and into 2018. In the report, IBM X-Force IRIS claims that FIN6 has harvested “massive” amounts of payment card data, though IBM has not said exactly how much data has been stolen.

“During at least one IBM X-Force IRIS investigation, we recovered several million unique credit card numbers from a compromised server the attackers staged data on,” Sean Cavanaugh, senior incident response analyst at IBM X-Force IRIS, told eWEEK. “Based on the available data we have, it is challenging to determine the overall financial impact due to stolen payment card data.”

Cavanaugh noted that the FIN6 findings IBM is revealing are based on first-hand investigations of incidents, along with X-Force IRIS’ analysis of external threat intelligence information available in the community.

The IBM report on FIN6 is not the first time the cyber-hacking group has been linked to a specific set of attacks. In April 2016, FireEye first identified FIN6 as a financial cyber-crime group that was going after payment card data. At the time, FireEye did not have a complete picture on all of FIN6’s activities, though FireEye did note that in one large campaign FIN6 stole approximately 20 million cards, worth an estimated $400 million.

While the FIN6 activity tracked by IBM X-Force IRIS involves the uses of the FrameworkPOS and GratefulPOS, Cavanaugh said it’s not clear if FIN6 actually created the malware they are using. He said the FrameworkPOS malware in particular has been used extensively by FIN6 over the last several years and the malware family has become synonymous with the threat group.

“A common tactic of most financial threat groups is to leverage freely available or open-source tools to further their objective rather than investing the time and resources into the development of custom tooling,” Cavanaugh said.

In addition to FrameworkPOS and GratefulPOS, FIN6 is using the open-source Metasploit penetration testing framework as part of its exploit chain. Metasploit is intended for use by security researchers and penetration testers to help validate the security of a given environments. Cavanaugh said IBM X-Force IRIS identified FIN6 leveraging the Metasploit framework for several phases of their intrusions into client environments. That said, he noted the use of Metasploit is not unique to FIN6.

“Attribution to a particular threat group cannot be made based on the use of a single tool or framework,” Cavanaugh said. “Instead, analysts need to understand how the threat group operates across multiple incidents, such as the frequent use of particular tools, utilities, and unique command and control infrastructure.”

FIN6 is using IT management software including the Windows Management Instrumentation Command (WMIC) to get malware deployed onto systems. In terms of how FIN6 is able to gain an initial foothold into networks, IBM suspects that the hackers are using legitimate log-in credentials that were either bought or stolen.

Attacks against PoS systems are not a new phenomenon and have been highlighted by major breaches in recent years. Among the organizations that have been impacted by PoS malware in 2018 is restaurant chain Chili’s, which reported a breach on May 12.

There are multiple things that organizations can do to improve PoS security, including enforcing strong password security and maintaining systems with up-to-date patching. Basic IT hygiene, however, is not always enough to defend against a motivated hacker group like FIN6.

“X-Force IRIS has responded to incidents where point-of-sale systems have been relatively locked down and secured, but given adequate access and time, a determined adversary is able to find a way to achieve their objective,” Cavanaugh said.

For example, he said that in a recent FIN6 engagement, the attackers bypassed application whitelisting by using PowerShell to load FrameworkPOS into the memory of the target PoS systems. He explained that if the client had configured PowerShell to only execute signed scripts, the attackers would have had a more difficult time harvesting payment card data from the PoS systems.

The use of PowerShell to load an attack is sometimes referred to as a “fileless” attack, as the attack is resident in memory as opposed to being loaded directly from storage. The use of a fileless attack is a trend that multiple organizations have observed in recent years, including Carbon Black and McAfee, among others.

The best approach to defending against FIN6 and other types of PoS risks is a defense in depth strategy that includes multiple components.