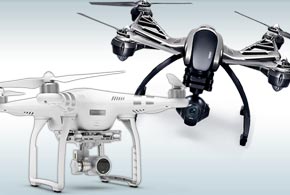 Growing awareness of the security risks posed by airborne drones has prompted police in Japan to create a dedicated drone squad.

The drone squad is equipped with a specialized drone that can intercept nuisance drones using a net to disable the target drone.

According to the BBC, the police drone squad will be deployed to protect important buildings and presumably certain public events.

It seems that once a suspect drone has been detected, the drone operator will be warned (via loudspeakers). If the operator fails to heed the warning, the police will launch their own drone interceptor that will capture the target drone in a net.

A video of the interceptor drone in action can be found here.

“Terrorist attacks using drones carrying explosives are a possibility,” a senior member of the police department’s security bureau told the Asahi Shimbun Website. “We hope to defend the nation’s functions with the worst-case scenario in mind.”

Japan has had cause for concern about drones, and the unmanned aircraft are banned in a number of locations including airports, power plants, roads, and certain parks.

Earlier this year, in April, a drone landed on the roof of the Japanese prime minister’s office. It was carrying a small amount of radioactive material, and although no one was hurt, a man was later arrested over the matter.

In September, a British drone enthusiast was banned from his hobby in the United Kingdom’s first conviction for flying an unmanned vehicle unlawfully.

Nigel Wilson from Nottingham was originally arrested back in March after he was caught flying a drone over Manchester City’s Etihad Stadium, but he also flew his drone over the Houses of Parliament, and Buckingham Palace.

He was banned from owning or operating a drone and fined a total of £1,800 for nine offences.

Currently, drones only can be used in the United Kingdom within sight of the operator and with permission of the Civil Aviation Authority (CAA).

The University of Birmingham recently highlighted the security risks of drones, especially as the aircraft could possibly be used by terror groups to attack public events.

Earlier this year, a drone crash-landed into stands during a match at the U.S. Open tennis tournament.

Pop star Enrique Iglesias was left bloodied and bruised following a run-in with a drone in front of a crowd of 12,000 fans at a concert in Tijuana, Mexico as part of his ‘Sex and Love’ world tour.