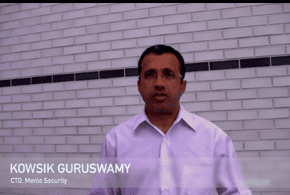 Menlo Security first gained some public exposure in November 2014, when the company raised $10.5 million in a Series A round of funding for what at the time was only stealth technology. In June 2015, Menlo Security raised an additional $25 million in a Series B round as it emerged from stealth, detailing its isolation platform, which makes use of Linux containers to limit risks.

The market for isolation technologies and approaches is an increasingly active space, with different vendors taking a position in the industry on how best to limit risk. For Menlo Security, Guruswamy noted that a differentiator is the fact that there is no endpoint software needed for the technology platform to work.

“Typically in the cloud we can on-board customers in about 2 minutes,” he said.

Among the big users of Menlo Security is a big bank that Guruswamy noted he isn’t allowed to name that is using the technology to help secure 250,000 employees.

“We started in 2015 with Web because between Web and email, that’s pretty much most of the malware out there,” Guruswamy said. “We’re fleshing out the product roadmap midyear.”

Watch the full video interview with Kowsik Guruswamy below: