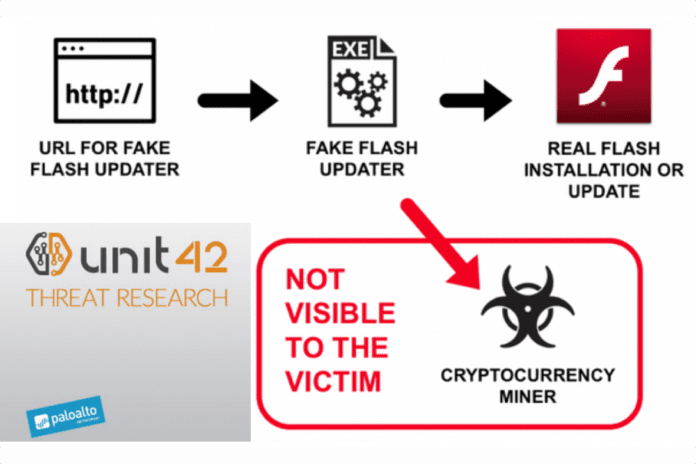 The scourge that is unauthorized cryptocurrency mining, often referred to as cryptojacking, is a phenomenon that has been on the rise in 2018, and it could get even worse.

A new report from Palo Alto Networks’ Unit 42 research group published on Oct. 11, details a new effort where attackers are masquerading as legitimate Adobe Flash updaters in order to install unauthorized cryptocurrency mining software on victims’ systems. According to Palo Alto Networks, the fake updaters are stealthier than what has been seen before.

What also happens is that alongside the actual Flash update, the fake updater installs the open-source XMRig mining software. XMRig mines the Monero cryptocurrency, which has been a favorite of cryptojacking campaigns.

Many end-user facing cryptojacking campaigns, however, rely on browser-based mining tools, such as Coinhive. Cryptocurrency mining tools consume CPU (and GPU if present) resources on a host system. A browser-based tool is somewhat limited in the resources it can pull and is typically only active while the browser is open. In contrast, XMRig is installed as a running service on the host operating system, potentially consuming more resources and operating constantly while a system is turned on.

Duncan said that in his research he found 133 different samples of the Fake Flash updater. What he was not certain of was how many victims there have been to date for the campaign.

Back in June, the U.S. Federal Trade Commission (FTC) issued a warning about the growing trend of cryptojacking and launched a reporting service for consumers. In research released on June 11 by Palo Alto Networks, the firm estimated that to that point non-browser-based cryptojacking attacks had generated at least $143 million in illicit earnings for attackers.

In his report, Duncan noted that across the different fake Flash updaters, there were at least 473 different file names and URLs that were observed from the period of March 25 through Sept. 10.

The download included a legitimate Flash update on first run for some of the samples. Duncan said that subsequent malware samples from this campaign just opened the web browser installer page for Adobe Flash Player after installing the Monero coinminer.

“I cannot say if Flash version detection was happening in the background, because I only saw the final result,” Duncan said. “However, different families of malware can profile a system to determine what types of software are on the victim’s host, and consistent URL patterns and file names for these Flash installers indicate they are all the same campaign.”

Duncan added that other campaigns with a Flash updater theme have deployed cryptocurrency miners, but they have different operating characteristics.

Adobe announced in July 2017 that it will be discontinuing its Flash Player at the end of 2020. Until then, Flash will likely continue to get updates and users might well continue to see fake updaters as well. For Adobe, Duncan isn’t sure there is much the company can do to stop fake updaters.

“Traffic from these fake updaters looks the same as legitimate updaters from the server side, so I’m not sure how Adobe could block this,” Duncan said.

That said, for end users and organizations, there are several things that can be done to block malware and limit the risk of unauthorized cryptocurrency mining. Duncan said that platforms like those from Palo Alto Networks detect fake updaters and malware fairly easily. Regardless of the endpoint security technology that is in place, he emphasized that user education is important.

“Only get Flash updates from Adobe and protect against downloads from unknown/untrusted sites,” Duncan said. “One should not install software provided by an unexpected window/web page that appears during routine browsing, no matter how convincing it may seem.”