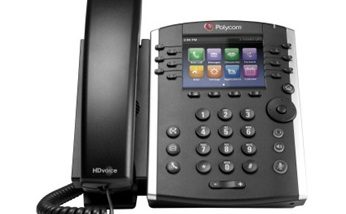 Polycom is pitching the VVX 300 series as an entry-level phone with six programmable line keys and suited for office workers that handle a low-to-moderate volume of calls. The VVX 400 series is sold as a mid-range business media phone with 12 programmable line keys and a larger color screen for enhanced call handling for knowledge workers and administrative assistants. The VVX 300 will be available for $179, the 310 for $219, the VVX 400 for $259, the 410 for $299.

With access to common workplace applications, users have the ability to view and manage their calendars, receive meeting reminders and alerts, and search the corporate directory. Each VVX phone can support up to three expansion modules and the VVX 310 and 410 models offer gigabit Ethernet connections.

The phones extend the existing portfolio of the company’s VVX business media phones. The series also include phones with video capabilities such as the VVX 600, which incorporates a 4.3-in. LCD screen and was unveiled in October 2012. The VVX 600 also features the Polycom user experience (UX) platform with more than 20 features, including a redesigned user interface, HD image quality, and other video, content sharing and audio features.

“VVX business media phones are an affordable, enterprise-grade solution that seamlessly connects with employees’ existing workflow and applications, such as calendars and address books, which can help workers in any industry be more productive,” Polycom senior vice president of product and solutions marketing Jim Kruger said in a statement. “The VVX 300 and VVX 400 business media phones integrate into a wide range of unified communications environments and have the industry’s best sound quality through features like Polycom HD Voice and patented Polycom Acoustic Clarity Technology for crystal-clear calls without echoes, drop-outs or feedback.”