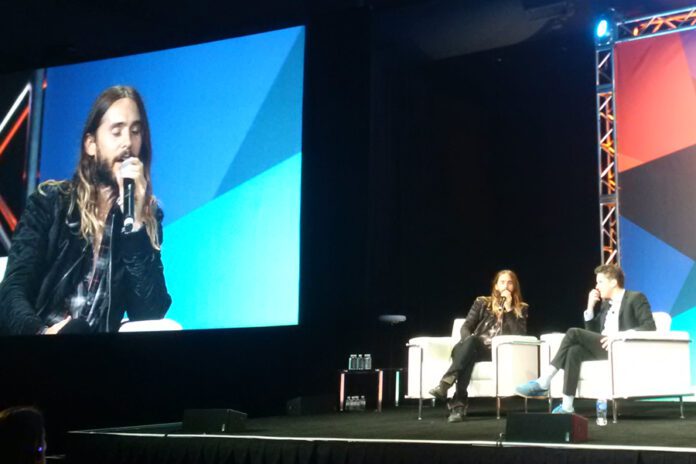 SAN FRANCISCO—Out of competitive necessity, cloud storage and business services provider Box is becoming more and more granular with its products and services.

Whereas nine years ago the company simply offered a way for individual users to back up and store their digital content, the Los Altos, Calif.-based company now has pivoted to an exclusive enterprise focus and diversified itself with a slew of new collaboration and workflow-related products.

On Day One of the fourth annual Boxworks conference here at the Moscone Center, CEO and co-founder Aaron Levie not only introduced several new products, but also brought in some familiar faces to add some star power.

Two customers, DreamWorks SKG Jeffrey (the “K”) Katzenberg and Oscar-winning actor Jared Leto (pictured at left with Levie), who’s also a musician with his band Thirty Seconds to Mars, went onstage with Levie to talk about new-gen IT and how it helps enable what they do.

First, the news: Levie introduced Box for Industries, a suite of enterprise content collaboration packages aimed at better managing how businesses across verticals use, share and store information.

Box for Industries will include tailored offerings for the Healthcare, Retail, and Media and Entertainment industries, with additional industry-specific suites to be introduced later this calendar year, Levie said.

Making Box for Industries a reality is the newly launched Box Workflow, which combines Box’s core content collaboration platform with automation and metadata control, so that users can create rules-based workflows that automatically classify, surface—and even recommend—Box content.

Other factoids on Box for Industries:

—Box for Healthcare connects disparate parties from across the sector to enable collaboration among health-care professionals to smooth out delivery of services. It features end-to-end solutions built on the Box platform to address key healthcare industry challenges, such as mobile access and HIPAA compliance, care coordination, and research collaboration.

For example, case information can be moved easily from one folder to another in the centralized Box app, so that health-care pros can gain access to them at any time, using any type of connected device.

—Box for Media & Entertainment will enable the secure creation and distribution of media content across the entire creative process including, production, digital asset management, and media releases.

“Distribution of music used to be relegated to walking down to the music store and buying vinyl or tapes,” said Leto, who’s been with Thirty Seconds to Mars for 16 years. “I’m old enough (42) to remember those days. Now it’s much more accessible, maybe too accessible. Actually I’m honored that people would want your music enough to steal it, because that means it might be really good.

“I do ask, though, that if you really want to steal music, go to a record store.”

Katzenberg, who recalled that he was fired from Disney in 1994 despite the fact that a string of projects he helped lead all excelled (the movie and stage versions of “The Lion King,” for two examples), said that his whole company depends on Box to facilitate workflows, store corporate and employee files, and make business operations in general run more efficiently.

Also on Sept. 3, Box also launched a beta version of Box for Office 365, which adds connectors to storage and collaboration tools along with extra capabilities for the Microsoft cloud product. Microsoft still isn’t a partner of Box just yet; having the Windows Azure Cloud as a competitor might have something to do with that.

“We’re still waiting for the contract with Microsoft to be closed, so we can do some business together,” Levie said. Showing a photo of new Microsoft CEO Satya Nadella and his Twitter handle (@SatyaNadella), Levie said: “If you’d like to reach him and ask him to sign the deal, here’s how to do it.”

For more information on the new Box releases, go here.