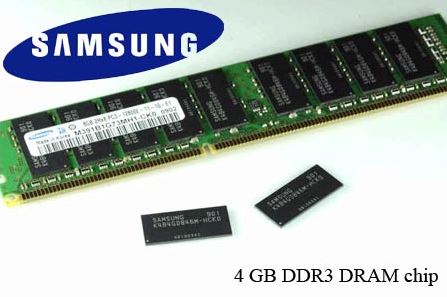 The memory processor is based on the second-generation High Bandwidth Memory (HBM2) interface, designed for use in high-performance computing, advanced graphics and network systems, as well as enterprise servers.

The 4GB HBM2 package is created by stacking a buffer die at the bottom and four 8-gigabit (Gb) core dies on top. These are then vertically interconnected by laser-drilled-through-silicon-vias (TSV) holes and microbumps.

A single 8Gb HBM2 die contains more than 5,000 TSV holes, which is more than 36 times that of a 8Gb TSV DDR4 die, offering a substantial improvement in data transmission performance compared with typical wire-bonding based packages.

Samsung’s new DRAM package features 256G bps of bandwidth, which is double that of a HBM1 DRAM package. This is equivalent to a more than sevenfold increase over the 36G-bps bandwidth of a 4Gb GDDR5 DRAM chip, which has the fastest data speed per pin (9G bps) among currently manufactured DRAM chips.

In addition, Samsung plans to produce an 8GB HBM2 DRAM package within this year.

The company said it will steadily increase production volume of its HBM2 DRAM over the remainder of the year to meet anticipated growth in market demand for network systems and servers.

Samsung also said it will expand its lineup of HBM2 DRAM solutions this year.