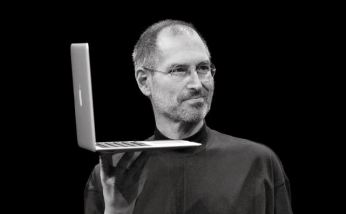 One way to know if a person made a relevant impact in his or her lifetime is when people write about how the world is different a year after that person left it.

Steve Jobs was indeed a world-changer. He co-founded Apple Computer, a company so big, so successful, that thousands of customers wait in line — sometimes for days at a time — just to get a chance to buy its products. Sometimes movies or concert acts draw that kind of attention, but if you try and name another products company that does what Apple does once or twice a year at its launches, you’d be hard-pressed to identify one.

Jobs died Oct. 5, 2011 at 56 after an eight-year battle against pancreatic cancer, but he had already upgraded the way the world communicates. The visionary who turned around Apple, teetering on bankruptcy in 1996, was responsible for changing how regular users view technology. He transformed computing with the iMac, iPod, iPhone and iPad, changed how people consume data, and upended the world of music marketing with iTunes.

Big Changes in One Generation

Jobs and partner Steve Wozniak co-founded Apple in 1977 and in the span of one generation changed the way the world uses personal information. He was a famous micro-manager with big ideas that resonated around the world and back millions of times.

Looking at the year since his passing, things continue to go very well at the company. Apple since his death has officially become the most valuable company in the world with a current book value of about $612 billion and a stock price of $652 (both as of Oct. 5), surpassing GE, Microsoft, IBM, Hewlett-Packard and Exxon Mobile. The company’s market cap was $351 billion at the time of his death.

Since Jobs’ death, the company has produced two new versions of its super-popular iPhone and is about to debut a smaller version of its equally popular iPad tablet on Oct. 17. Production rolls along, as if Jobs’ spirit is still moving through the halls and meeting rooms of the company’s Cupertino, Calif. campus.

His hand-picked successor, Tim Cook, understands the operational side of the IT products and services business. He’s never pretended to be the visionary his mentor was, nor should he — or anybody else — ever assume that attitude.

Some people have written that with Jobs out of the picture, that Apple is a rudderless ship that eventually will be grounded by lack of a visionary at the top. This isn’t necessarily the case. Even the great companies have their good waves and bad swells during their lifetimes — in the IT business, a quick look at IBM, Hewlett-Packard and Apple itself bear this out — but Apple doesn’t absolutely need another Jobs at this time to keep it producing as well as it has.

Why? Because of the enormous imprint Jobs made on his company culture, his customers and the IT world in general. His presence was so ubiquitous, so unforgettable in the halls of his company, in boardrooms and in press conferences that his spirit is not going to fade away anytime soon.

People who worked side by side with him know and will never forget how he operated. I personally know people at Apple who so respected and feared him that they sometimes avoided getting in an elevator with him, especially near product launch time. He was that intense, and this has rubbed off on many people over the years. They have learned the lessons Jobs taught them.

On the other hand, some people may have forgotten that Jobs had left Apple for 11 years (from 1985 through 1996) after being fired by his own board of directors following a long internal battle. In the interim, he learned more about how to be a CEO and went on to work on other projects, including NeXT Computer and Pixar Animation Studios.

By the time he returned in 1997, Apple was nearly bankrupt. Sun Microsystems, now absorbed by Oracle but then in its heyday, was very close to announcing the purchase of the company, but legal red tape held up the deal and it was never consummated. (For more detail on this, read the Feb. 25, 2011 eWEEK article “How Apple Dodged a Sun Buyout: Former Execs McNealy, Zander Tell All.”)

The company survived that crisis, and it will survive for a long while to come. Most of Apple’s key product designers and software developers remain in place, and the company’s reputation has never been stronger. Sales have never been better.

One can only surmise that Jobs himself is looking down on his creation and smiling — a really intense smile.

Many video tributes to Jobs have been published on YouTube and other sites. Here are two of them: one by Apple itself (temporary link here) and one by CBS News. The San Francisco Chronicle put together a comprehensive photo list, tracing his entire career.