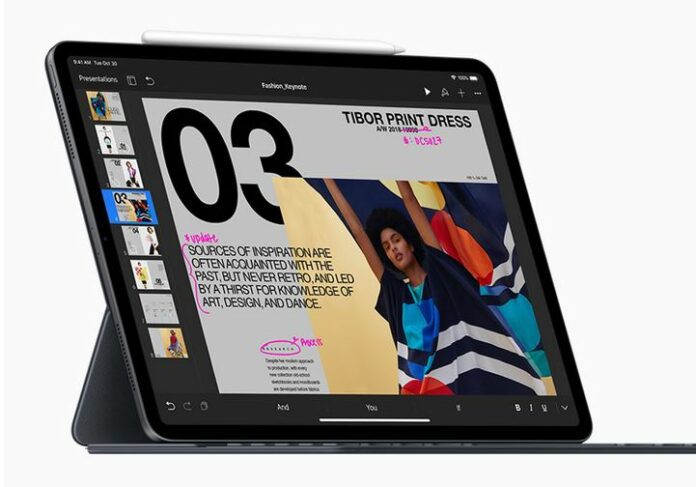 BROOKLYN, N.Y. – Apple took over a century-old opera house here Oct. 30 to announce some of the company’s most important product announcements in recent years. The long-neglected MacBook Air and the also-neglected Mac Mini were finally improved to a point where they can compete with existing hardware from other manufacturers. In addition, iPad Pros of both sizes got their expected improvements to help keep them competitive with today’s technology.

The Mac Mini has moved even more into the enterprise. It’s now a very high-end computer that can provide workstation-like performance at a price that’s competitive with medium priced desktop computers. It’s now got a choice of four or six core processors and up to 64 gigabytes of memory. You can get SSD storage up to 2 terabytes, and there’s a variety of I/O ports, including four USB-C, as well as either Gigabit or 10-gigabit Ethernet and HDMI ports along with regular USB 2.0 ports for things like mice and keyboards.

The upgraded Mac Mini costs more than its predecessor, starting at $799.00, and if you configure it fully, it can cost over $4,000.00. But that’s not a lot for a machine that’s equivalent to the lower end of workstation-class machines, and the fact that it takes up so little space will make it attractive to a number of enterprise customers. The fact that it can be rack-mounted (as Apple showed during the introduction) means that Mac Minis can be used for things such as production or development clouds.

Mac Mini: The Most ‘Enterprise’ Product the Company Makes

One feature that Apple didn’t remark on is that the Mac Mini uses industry standard RAM, which means you can upgrade it in the field. Since Apple has long since left the server market, this is perhaps the most enterprise-oriented product that the company makes, and the improvements are much needed.

Likewise, the upgrades to the MacBook Air were long overdue. This was a leading-edge notebook back in the day, and the improvements that Apple announced are enough to keep it competitive with current technology, although it’s not really leading-edge at this point.

Still, the 13.3-inch screen is large enough to be useful and small enough to be convenient. Its new Retina display brings a welcome level of clarity, and its new levels of color depth make images on the screen something you don’t mind looking at.

But there’s a lot more to the new MacBook Air than just a small size and a nice screen. IT managers will like the addition of Apple’s T2 security processor that handles tasks such as Touch ID and real-time encryption. Users will like the new Intel i5 CPU and the selection of SSD storage. They’ll also like the larger force-touch trackpad that can be clicked anywhere, and they will probably like the new butterfly keyboard, which improves the typing feel significantly over the previous chicklet keys. Now, at last, there’s actual key travel and tactile feedback.

Apple is now moving to support Thunderbolt 3, (USB-C) ports, so you’ll find two of those on the MacBook Air. But one thing you won’t see is a touchscreen. For reasons that remain obscure, Apple is the only laptop maker that doesn’t support a touchscreen.

Most of the attention lately has gone to the iPad Pro, and Apple’s premium tablets got a round of updates as well. The biggest change, and one that was widely anticipated, is the incorporation of Face ID into those tablets. On the iPads, Face ID will work in any orientation, and in an improvement over the iPhone X series, there’s no notch at the top.

By incorporating Face ID, Apple has been able to remove the bezels around the edges of both iPad Pros. The smaller of the two, now the 11-inch iPad Pro, has a screen that completely fills the front surface of the tablet because there’s no home button to take up space. The effect is visually striking with the edge to edge Liquid Retina display, coupled with a faster A12X processor with an embedded motion coprocessor and a neural engine.

The 12.9-inch iPad Pro is more noticeably changed because while it retained the same screen size as its predecessor, it also eliminated the home button and made the screen edge to edge. This results in a reduced size for the larger iPad Pro itself, which is now the same size as an 8.5 x 11 sheet of typing paper. Both iPads are slightly thicker than that sheet of paper at 5.9 mm, but they’re still really thin and slightly (by 0.01 mm) thinner than the already thin 10.5-inch iPad Pro.

Other things that have changed along with the iPad Pro include a new keyboard / cover that supports multiple viewing angles for the tablet, and a new Apple Pencil. The new Apple Pencil eliminates the complaints about the original version. It now sticks to the iPad Pro magnetically, and when it’s attached, the iPad charges it wirelessly.

Another significant change is that Apple has done away with the Lightening Connector on iPad, replacing it with a Thunderbolt 3 (USB-C) connector. This connector can work with a standard hub, it can be used to charge your iPhone, and it supports Display Port over USB-C, meaning you can simply connect an external monitor to the iPad. The tablet will support up to 5k video, and when I saw it connected to a 4K UHD monitor, it worked perfectly.

The iPad Pro models start at $799.00 and $999.00, and the 10.5-inch iPad Pro will remain available as well, although at a reduced price. Apple is keeping the rest of the iPad line, including the iPad Mini.

Clearly, we’ll be looking at these products in greater depth, but with the October announcement, Apple has brought a lot that the enterprise needed in its products.