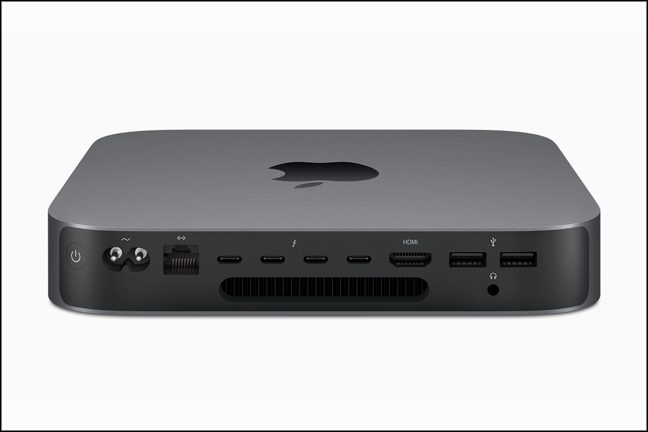 It’s not clear whether Apple intentionally echoed Stanley Kubrick’s black monolith from the 1968 movie “2001: A Space Odyssey,” but the nearly featureless space gray block looks faintly ominous as the new Mac Mini rests on top of a Lenovo workstation. But it’s certainly not featureless. There’s a shiny Apple logo on top, a single white LED on the front showing that the power is on and ports on the rear.

There are four Thunderbolt 3, USB-C ports that also support DisplayPort video. There is a Gigabit Ethernet port that can be upgraded to 10 Gigabit Ethernet, the HDMI 2.0 port supports video up to 4K, and there is a pair of USB 3.1 ports along with a headphone jack. Power is supplied through a two-wire AC connector with a standard two-prong plug.

Works With Lots of Peripherals

The fact that Apple is using Thunderbolt 3 for its Mini adds a great deal of flexibility. I was able to use the test Mac Mini with a Dell U2718Q 27-inch 4K display connected through a simple Thunderbolt 3 to DisplayPort dongle. But there’s more to the Mac Mini’s flexibility than just those connectors.

Apple also has made its newest Mac compatible with a wide range of peripherals, giving it the ability to fit into the enterprise without a lot of fuss. For example, Apple shipped its Magic Keyboard and its Magic Trackpad with the test unit, but instead of using those at first, I tried a standard IBM USB keyboard and a Microsoft mouse. Both worked flawlessly.

The Apple keyboard connects wirelessly to the Mac Mini as does the trackpad, and using those would free up the two USB 3.1 Type A ports. Both of those work well, and pairing is quick and easy. What’s important about the Mac Mini is that you don’t need to use them, as you can use other peripherals you may already have in your office.

The Mac Mini that Apple sent for testing was the basic unit. This means it was configured with an 8th generation, four-core Intel i3 processor, 8GB of memory and a 128GB SSD for storage. This combination was reasonably fast, delivering average Geekbench 4 single-core results of 4616 and multi-core results of 13979. These aren’t high-end workstation results, but they indicate performance that’s certainly adequate for routine office tasks. More performance is available. You can order SSDs up to 2TB, memory up to 64 gigabytes and an intel processor up to a six-core i7.

If You Want Extra Storage, Order It Off the Top

While Apple doesn’t list the memory as being user upgradable, it’s held on socketed SO-DIMM memory cards. The memory and other internal components are located below the round bottom covering. Pry that off, and you’ll see a screen secured using Torx screws. Adding or replacing the memory won’t void the warranty, according to an Apple spokesperson.

The memory is the only thing you can replace manually, however. The SSD is soldered in place, so you’ll need to decide what size you need when you order the Mini. The processor isn’t field upgradable.

During a demo session following the announcement of the new Mini in Brooklyn on Oct. 30, Apple was able to show that the new Mini can be clustered to provide significant levels of performance. For example, I saw five Mac Minis clustered to provide real-time rendering using Final Cut Pro and Apple’s Compressor. The five Mac Minis were connected using 10-gigabit Ethernet and a 10-gig switch as a virtual backplane. The results were impressive.

The video was equally impressive. Apple uses Intel’s UHD Graphics 630, which is capable of supporting two 4K monitors at 60Hz, or a 4K and 5K monitor at the same rate. The GPU in the graphics system produces a Geekbench compute score of 19017, which is equivalent to the HP Z620 workstation we recently upgraded in an article here.

The new Mac Mini performs well in its base configuration as a desktop computer. I was able to install and use Adobe’s Creative Cloud software and Microsoft Office 365 without a hitch, and Apple includes a nice selection of software from Apple, including its own word processor, graphics and photo editing.

If I were to buy a Mac Mini for my own office, I’d add a larger SSD, more memory and possibly a faster CPU. In its basic configuration, the Mac Mini sells for $799. Configured the way I’d want it, with an i5 processor, 16 gigs of memory and a half-terabit SSD, and the six-core CPU, the price would rise to $1,499. That’s not a bad price for a midrange workstation, and the Mac Mini gives you a lot for that price.