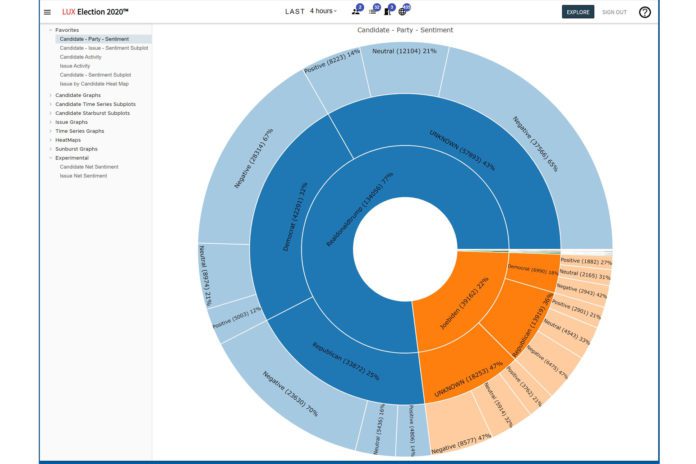 Figuring out what voters think during an election year is at best an imperfect art. While there’s plenty of polling during such times, the results of that polling can be inaccurate, as was demonstrated during the 2016 election when Donald Trump won, despite polls saying he wouldn’t. At that time, sentiment analysis was in its early stages, but even then, eWEEK was able to see a potential Trump win in the data.

Four years later, much has changed. Polling has become more accurate, and pollsters have found the weaknesses in their numbers. For example, calling only voters with landlines resulted in a poor sample of likely voters because some demographic groups have few landlines. In addition, it’s become clear that a surprisingly large number of people don’t tell the truth when asked whom they plan to vote for. If there are enough of these so-called hidden voters, they can throw the results off.

[Image caption: The blue section of the LUX pie chart, which comprises roughly 75% of the data, represents the negative sentiments by viewers toward Republican President Donald J. Trump following his tempestuous performance the Sept. 29, 2020, presidential debate between himself and Democratic candidate Joe Biden, in which he interrupted Biden 71 times.]

[To view a larger version, right-click on the image and select “Select Image.”]

Sentiment analysis based on social media has its own built-in sampling issues. For one thing, it only records people on social media, which also may miss some demographic groups, such as elderly voters who may be under-represented, especially on Twitter. But a significant difference is that political sentiments appear to be expressed more truthfully on social media than they are when pollsters call.

The LUX analysis software from ICG Solutions takes the entire data stream from several social media sites and applies a series of rules to the data to filter out users who aren’t likely to be voters in a U.S. election. It also uses those rules to determine demographics such as gender, age, location and political party.

As the data stream is being analyzed, other factors are considered as well, including whether comments are positive or negative toward a specific candidate, as well as whether they apply to the election at all. Those that do apply to the election are also analyzed for specific issues beyond which candidate the user might support. Those issues include, among other things, health care, gun control, Covid-19 or recently, debate behavior.

The results of the sentiment analysis are presented on the Political Analysis pages of LUX Election 2020. Other pages show sentiment by state or congressional district as well as overall voter sentiment toward the candidates. By using the Voter Maps it’s possible to learn the leanings of a specific district, making it possible to discern potential Electoral College results in states that apportion their electoral votes.

You can watch voter sentiment change in real time when you go to the Political Analysis and click on the Experimental section. During the first presidential debate on Sept. 29, 2020, you could actually see the voter sentiment plots change as questioning progressed, and when the president lashed out at questioners or his opponent, you could watch Donald Trump’s sentiment numbers plunge deeply into negative territory. The next day after the debate, a similar pattern emerged as voters apparently had a chance to digest the news reports of the previous night’s debate.

While it’s interesting to watch the results in near-real time, it’s probably more useful to look at longer-term sentiment results by selecting a view as long as a month or even three months. That longer-term sentiment, especially if it’s negative sentiment, is likely a more effective measure of potential voting. For example, long-term results showing Republican voters expressing negative sentiment toward the president may show that some of those Republicans may decide to vote Democratic, or they may simply not vote in the presidential race.

Whether the sentiment analysis being performed by LUX Elections 2020 accurately reflects voter behavior remains to be seen. The first post-debate poll results will be released a few days after the debates, and should cover the same time period being covered by LUX Elections 2020. Both methods of measurement will have different samples and significantly different sample sizes, but if the voter sentiment generally tracks poll results, then LUX could be an important indicator.

Note that there is more than one kind of sentiment analysis focusing on the elections. One good example is when people put their money down to bet on the outcome of an election, and also showing a rise in sentiment toward Biden.

“Our political-odds models are going to take into account a number of different factors, and without a doubt, a big part of the equation is public perception,” said Robert Cooper, odds manager at SportBetting.com. “We know that bettors are going to react to trending news and recent events, and after what we saw last night, it was pretty clear as to which way we needed to move the needle.”

But the difference in the sentiment and the polls may indicate that there are a number of hidden voters in favor of Biden. Normally, indicators of voter sentiment in September when the election is still six weeks away leave a lot of room for error. But in 2020, voting is already under way. This may mean that the sentiment is already being translated into votes. That could mean a Biden landslide in the 2020 election.