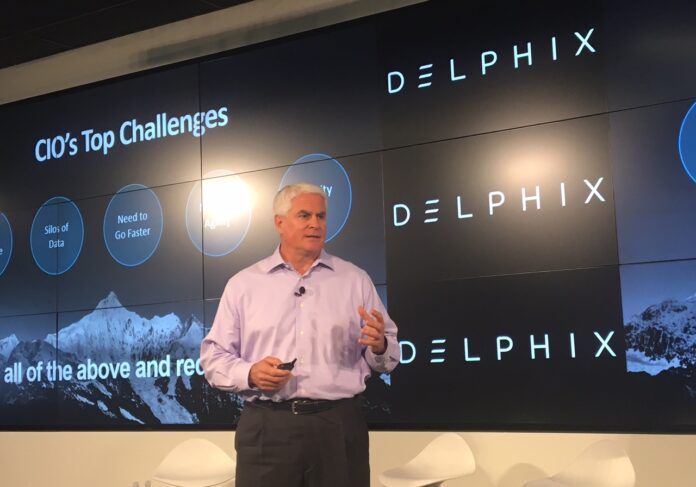 Delphix, celebrating its 10th year in business in 2018, has put all its chips on something called DataOps to carve out its niche. The company uses DevOps, DataOps and a tool called Data Pods to provide its own brand of IT data management that has been earning close looks from a growing number of potential customers.

These are all contained in Delphix’s Dynamic Data Platform, the data management package it launched last August that offers users the ability to virtualize, manage and secure data with a centralized controller. It has been developed using the company’s underlying intellectual property plus the data-masking secret sauce Delphix added in 2015 when it acquired Axis TS.

On Jan. 17, the Redwood City, Calif.-based company went a step further, releasing a new version (5.0) of its platform that brings new meaning to the term “data privacy.” The release includes a much more user-friendly interface, improved data masking, a monitoring dashboard and support for more data sources.

GDPR Causing Worry in Many Quarters

With the impending General Data Protection Regulation (GDPR)  becoming law next May 25 in Europe–which threatens serious fines for non-compliance–multinational companies are sitting up and taking notice about making sure their storage and data protect systems are compliant. This takes into account not only where data is physically stored, but whether it is encrypted and/or masked.

Another one of the rules: If there is a breach in a data store, the owner must report it within 72 hours to the European Union compliance office. This, as one might imagine, is playing havoc with security administrators and boards of directors.

For companies that trade in financials, government documents, health care and other sensitive information, the GDPR is fast becoming the bane of existence for corporate chief security officers. Data masking is part of these new security requirements.

Delphix is very good at data masking, which is used by the intelligence agencies, law enforcement, governments and enterprises for keeping portions of documents physically away from the wrong eyes—such as names, phone numbers, addresses, Social Security numbers, other personal information—so that some information can be shared while keeping personal privacy intact.

“If you have any presence (globally), this (data privacy) is a huge issue,” Senior Vice-President of Products Parick Lightbody told eWEEK. “What I find fascinating about this legislation is that it affects companies that aren’t anywhere near its jurisdiction. So it’s going to affect a lot of companies very soon.

“In this new version, we’ve made significant improvements, for example, in enabling users to find stuff that could be considered sensitive information and needs to be addressed, and also to build up the rule sets so the data is properly masked.”

Highlights of Delphix v5.0 include:

As part of this release, Delphix also expanded support for Oracle 12c to enable companies to better use 12c pluggable and container databases, allowing for consolidation of Oracle infrastructure. In addition, Delphix has released enhanced database-level support for DB2 along with additional SAP ASE certifications.