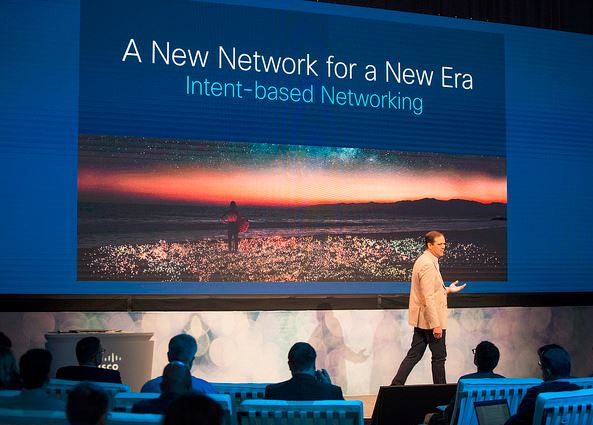 Cisco Systems is taking its concept of a smart network to a whole new, post-graduate level.

At a media event in San Francisco, the world’s largest internet pipeline fitter and networking provider on June 20 unveiled what it calls an “intent-based,” cognitive-in-nature networking system that anticipates actions, provides predictive analysis if needed and stops security threats in their tracks—all while machine-learning everything for future use.

In short, this network ostensibly will know more about what’s going on inside the pipes than most administrators will ever learn; in a lot of cases, it will know how to fix errors and plug security holes faster than a human can analyze a problem and do something about it.

Nothing against network admins; it’s just that there are so many new-gen pipelines being laid, connecting so many new data sources, clouds and storage arrays in anticipation of the Internet of things, that it is getting virtually impossible to manage what are fast-becoming mega-networks. The new Cisco network is the result of years of research and development to reinvent networking for an age where network engineers managing hundreds of devices today will be expected to manage 1 million by 2020.

What Distinguishes an ‘Intent-Based’ Network

What’s the main difference between an “intent-based” IT network and a typical “smart” network, which also contains brains that are quite useful for IT admins? Can it “read” admins’ minds, so to speak?

“In my mind, the intent-based network is solving specific customer issues,” Cisco Vice-President David West told eWEEK. “These are around digitization, IoT, mobility, cloud, pervasive security. This is taking infrastructure and combining it with software to deliver a rich set of services across a network.”

This new network is content-based, because it will use machine learning to capture and understand what is going on across all networks inside a system, West said. It will know what an admin needs before he or she does.

So does this mean that these networks can be optimized for specific use cases within various industries?

“Yes, this is programmable, it’s API (application programming interface)-driven, it has consistent silicon and a new operating system that runs across the entire Cisco product line,” West said.

Chuck Robbins (pictured at the June 20 event in San Francisco) has been at the forefront of this initiative during his two years in the Cisco CEO chair.

“The network has never been more critical to business success, but it’s also never been under more pressure,” Robbins told a gathering of press and analysts. “By building a more intuitive network, we are creating an intelligent platform for the future that propels businesses forward and creates new opportunities for people and organizations.”

Conventional Networks May Be Unsustainable

Most companies manage their networks by using conventional IT processes that are likely to be unsustainable in the age of IoT. Cisco’s approach is an intuitive system that constantly learns, adapts, automates and protects, in order to optimize network operations and defend against an always-worsening threat landscape.

Cisco, which has been looking during the last several years to move into new businesses because its original Internet pipes have pretty much saturated the global market, has decided to go back to the future and revisit the needs of the IT network economy as it will relate to future economies.

As a result, the company decided to use its No. 1 network market position to gather data of all types and move its products to the new level noted earlier in this story. All this data from the field is being used to create its new analytics-led system, so that it can provide IT users with insights to spot anomalies and anticipate issues in real time, without compromising privacy.

By automating the edge of the network and embedding machine learning and analytics at a foundational level, Cisco is able to manage and automate growing networks and allow IT to focus on strategic business needs, West said.

Cisco describes its intuitive network as an intelligent, highly secure platform “powered by intent and informed by context.” More specifically:

What Powers the Intuitive Network

Cisco Digital Network Architecture (DNA) is comprised of the following:

Cisco said it is rolling out its new Catalyst 9300, 9400 and 9500 systems containing all these new capabilities this month and in July. Other products will be made available next fall. Go here for more information.