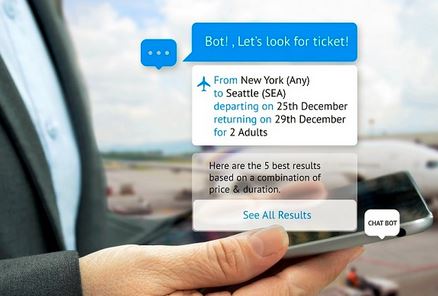 If machines themselves do not replace humans in doing a lot of jobs in the future, chatbots probably will.

A chatbot is an artificial intelligence-powered piece of software in a device (Siri, Alexa, for example), application, website or other network that attempts to find out what a consumer wants, then serves as a traffic cop of sorts to help complete a commercial transaction. Chatbots are becoming cognitive—remembering voice commands and user preferences—as time goes on; they are also becoming more humanistic.

By 2020, Gartner estimates that chatbots will be handling 85 percent of customer-service interactions; they are already handling about 30 percent of transactions now. When it comes to hard numbers, Juniper Research projects that by 2022, chatbots will be contributing to more $8 billion in annual cost savings for enterprises.

How chatbots actually will be impacting the human workforce in the future is anybody’s guess. Maybe we someday will see chatbots hiring humans to do grunt work for them.

Tech Giants Behind the AI Trend

Tech giants such as Adobe, Verizon, Microsoft, Google and Facebook are currently the driving force behind what AI-powered experiences look like, prioritizing calls for streamlined and faster interactions. There’s a lot of money in that trend. However, with Constellation Research expecting the AI market to surpass $100 billion by 2025, the technology is primed to help all businesses address the always-changing needs of 21st-century consumers, regardless of their own digital capabilities.

PointSource, a design and development firm based in Raleigh, N.C. that was acquired last year by Globant, released an industry report Jan. 10 that investigates the current state of consumer understanding and comfort with AI adoption–specifically chatbots. It also uncovers what’s standing in the way of consumer acceptance as companies make increasing investments in deep-learning technology.

eWEEK ran a slideshow Nov. 28, “Eight Reasons Why Chatbot Technology Isn’t Ready for Commercial Use,” suggesting that the technology isn’t quite mature enough just yet to serve a global market. PointSource’s subsequent research takes issue in some ways with the concept, reporting that chatbots are already more successful that industry people thought they would be by this time.

According to the PointSource report, 54 percent of consumers have used an AI application over the past year; however, 62 percent actually indicated they have used an AI-enabled device, meaning that 8 percent of survey takers didn’t know they were using AI–a statistic that likely doesn’t even capture the full scope of misunderstood AI experiences.

Key Findings in the Research

Other key PointSource findings include:

According to PointSource, leading problems with chatbots—as one might expect—include privacy/security and speed and friction when interacting with AI: