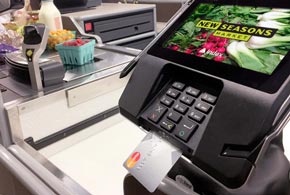 A year into the use of EMV chip-based credit cards in the United States, fraud against consumers and merchants has dropped 54 percent for merchants who have made the switch, according to payment processor MasterCard.

That’s great, but the downside of chip cards—that agonizing 10- to 20-second delay at cash registers equipped with the chip-card readers—has to be fixed. I’ve found the chip-card delays to be so bad that I predict right now that they will cause havoc this holiday shopping season.

Why do I say that?

Where I live in Pennsylvania, the chip-card delays at stores like Target, A.C. Moore and Lowe’s are so long that I can imagine shoppers in the coming November and December holiday season losing whatever patience they have left and walking out. I can visualize them getting so frustrated waiting in the slowed-down cash register lines that they dump their purchases on store floors and run home to order gifts online.

If that happens, it’s going to make losses to fraud seem tiny for store chains that see a key part of their annual revenue and profits come in during the holiday season.

According to MasterCard, as chip cards in the United States mark their one-year anniversary, about 88 percent of MasterCard credit cards have chips, which is up 105 percent from Oct. 1, 2015, when merchants were told they would be liable for fraud if they weren’t equipped to handle chip cards. Some 2 million merchant locations are chip-ready, which is up 468 percent in the same period.

MasterCard and other card processing companies say chip cards are critical for business because their integrated chips talk to special terminals and prevent the use of counterfeit cards through the creation of unique codes for purchases. That’s great, but that also slows down transactions in many cases.

But hope is in the air.

Recently, I traveled to Las Vegas for the CTIA technology conference and used chip-card terminals at Walgreen’s and Welcome to Las Vegas stores that processed my transactions so quickly I couldn’t believe it. No 20-second delays, but an almost instantaneous and pleasant experience.

I called MasterCard to find out why all chip card terminals couldn’t duplicate this experience.

“It’s a very valid question and is something that we have been working on,” said Chiro Aikat, a MasterCard product delivery executive. Part of the delay is due to the additional information that’s processed for the unique codes used in the transactions, he said.

To help speed up the transaction, MasterCard recently introduced a new application, M/Chip Fast, that prioritizes the security steps in the process, said Aikat. Several grocery stores in the United States use it today. “The consumer response was phenomenal—with delays of just two to 2.5 seconds.”

More such improvements are coming, he said. “With any migrations, there is a level of maturity that occurs,” he said. “I think the market is moving and focusing on the optimization part of it.”

Let’s hope he is correct.