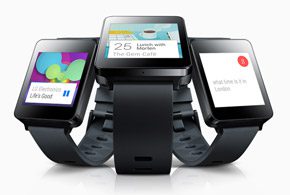 The Samsung Gear Live and LG G Android Wear smartwatches are now on sale and available to consumers as of July 7, giving prospective users new ways to access the information they use in their daily lives.

Both devices are now available through Google Play, with the black Samsung Gear Live retailing for $199 and the LG G smartwatch priced at $229 in black or white, according to their respective Google Play listings.

Both smartwatches were announced at June’s Google I/O 2014 developer conference, where they were a big part of Google’s Android Wear initiative—the company’s operating system for wearable devices—which was unveiled earlier this year.

The LG G smartwatch includes an always-on display, a 400mAh battery that is claimed to last all day, 4GB of internal memory and a 1.2GHz CPU, according to LG. It comes with a charging cradle, a travel adapter, a data USB cable and a quick start user guide. The watch connects wirelessly and works with many smartphones that are running Android 4.3 or higher, according to LG.

Google’s Android Wear software works with Google Now and both the LG G and the Samsung Gear Live watches to run a variety of Android apps that can provide users with a wealth of real-time information about appointments, flights, weather forecasts, road conditions, directions, sports scores and much more.

Users must install an Android Wear app on the smartphone or tablet and then use it with their smartwatch to gain the features.