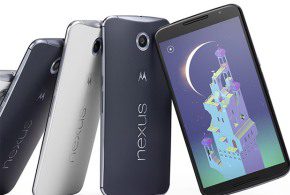 The Nexus 6 will be available through Sprint starting Nov. 14, while AT&T will begin taking preorders for the device beginning Nov. 12, and T-Mobile has set Nov. 19 as its launch date for the phone. Verizon Wireless has not yet set a date for when the Nexus 6 can be purchased by its customers.

Sprint, the first of four to actually sell the phone to its customers, said in a Nov. 11 announcement that it will be available on Nov. 14 in its Sprint stores and online for no money down and 24 monthly payments of $24 on a Sprint Easy Pay plan, for a total of $696. The monthly payments are in addition to a monthly wireless service plan. Subscribers can get a $60 unlimited plan or a Sprint Family Share Pack plan with up to 10 lines for $100 a month through 2015, including 20GB of shared data and unlimited talk and text per month.

The Nexus 6 smartphone, which was announced in October, was developed with Motorola and includes a contoured aluminum frame, a 6-inch Quad HD AMOLED display with Gorilla Glass 3, a Qualcomm Snapdragon 805 SOC CPU, a rear-facing 13-megapixel camera with optical image stabilization and dual LED ring flash, a 2MP front camera, dual front-facing stereo speakers and a Turbo Charger that provides up to 6 hours of use after only 15 minutes of charging. The phone is available from Motorola in Midnight Blue or Cloud White with 32GB or 64GB of memory and features a 3,220-mAh battery. Pricing starts at $649, according to an earlier eWEEK report. The smartphone runs on Google’s latest Android 5.0 Lollipop operating system.

AT&T will begin taking preorders for the Nexus 6, the first Nexus device it has offered to consumers, starting Nov. 12 in its stores and on its Website, the company announced. The phone can be purchased presently only in Midnight Blue from AT&T for $249.99 with a two-year contract or for $682.99 without a contract. The device can also be purchased under a monthly payment plan for $22.77 for 30 months, $28.46 for 24 months or $34.15 for 18 months.

T-Mobile said it will start selling the Nexus 6 on Nov. 19 for $27.08 a month for 24 months (total price $649.92) on T-Mobile’s Equipment Installment Plan. The company originally planned to release the phone on Nov. 12, but delayed it due to inventory concerns. Customers can sign up with T-Mobile now to get more information on obtaining one of the devices.